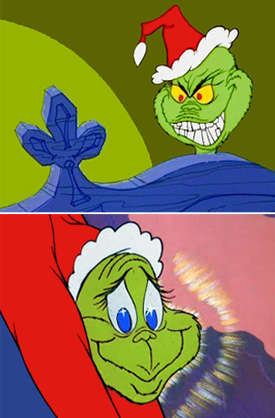 The Grinch, before and after a wondrous (and literal) change of heart.
"And what happened then?
Well, in Whoville, they say,
The Grinch's small heart
Grew three sizes that day."
— How the Grinch Stole Christmas!
Advertisement:

Sadly, it sometimes leads to Redemption Equals Death, and when it doesn't, someone still needs to draw their "Get Out of Jail Free" Card. Otherwise they may find the good guys unwilling to believe them; their conversion met with a Heel–Face Door-Slam (or they may "merely" find themselves Reformed, but Rejected). On the other hand, the bad guy may reject their chance at turning over a new leaf altogether, in which case it's Redemption Rejection.

Compare The Mole, who is secretly working for the other team all along. May be the result of a person that was Good All Along. When someone who doesn't care one way or the other is forced to fight they become Neutral No Longer. Also, to Personal Hate Before Common Goals, when the alignment changes, but previous rivalries remain.

This is the opposite of a Face–Heel Turn and is generally found in stories with Black-and-White Morality. It has two subtropes: Heel–Face Brainwashing, more or less the opposite of Brainwashed and Crazy, and High-Heel–Face Turn (usually the redefining moment for a Dark Chick). See also Mook–Face Turn when the bad guy doing it is a Mook, and Heel–Race Turn when an entire faction does it. If a character keeps switching from one side to the other and back, they're in a Heel–Face Revolving Door. If they turn face, but still act like a heel, they're Reformed, but Not Tamed. If a character pretends to reform, only to be revealed as Evil All Along, they're a Fake Defector. If someone reforms because of faith, they're in a Heel–Faith Turn. Compare and contrast, also, with Hazy-Feel Turn, when is unclear and/or ambiguous the sincerity and/or the extention of the Heel-Face Turn of the character.

In Real Life, the nature of Heel-Face Turn and Face–Heel Turn is subjective (one person's "seeing the light" is another person's "heartless betrayal or fall" depending on what group the individual is going to or leaving). Therefore, No Real Life Examples, Please!