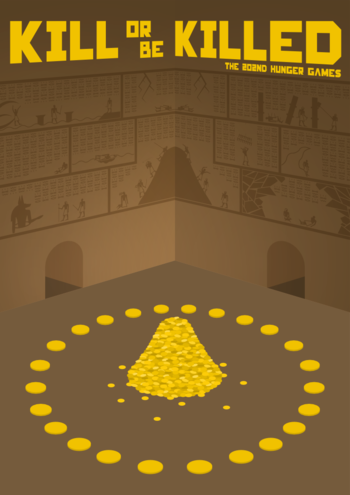 The Toxicverse, as it is has been dubbed, is a fanfiction series created by ToxicatedRose

. It is a series of stories in a hypothetical alternate timeline, where the rebellion failed and the Hunger Games prospered. The story-line picks up in the 2nd century during the reign of the merciless President Marx Nystalgia; at the dawning of the 202nd Hunger Games.

The first story - the 202nd Hunger Games: Kill or be Killed

, took place inside a great Pyramid, modeled after the Pyramids of Giza in Pre-Panem.

The sequel - the 203rd Hunger Games: Hurt or be Hurt

, took place in a giant park & nature reserve surrounded by a forest — seemingly beautiful at first glance, taking on an ominous and grim tone at nightfall. A cruel twist was added during this Games, a twist which dramatically altered the way tributes were forced to play.

The third - the 204th Hunger Games: Crush or be Crushed

, was set in a giant reconstruction of the Palace of Versailles in Pre-Panem Europe. Several tributes were granted special abilities by the Capitol to escalate the Games. Widely regarded as the most controversial. It was during this time that rebels began to make their resurgence in Panem for the first time in two centuries.

The recently published and heavily anticipated 205th Hunger Games: Hunt or be Hunted

, is set in the bloody aftermath of the rebellion, as a purge sweeps through Panem to silence the revolution forever.