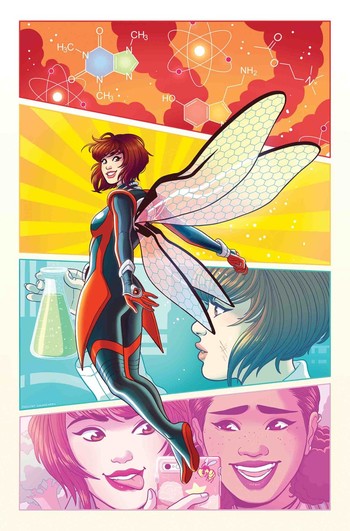 Unstoppable Wasp is a 2017 comic book published by Marvel Comics, written by Jeremy Whitley with art by Elsa Charretier and Gurihiru. It stars Nadia Pym, later Van Dyne, as the all-new Wasp, who first appeared in Free Comic Book Day 2016: Avengers, created by Mark Waid and Alan Davis (dated May 2016) with a costume designed by Alex Ross.

The daughter of the legendary scientist (and founding Avenger) Hank Pym and his late wife Maria, Nadia never actually knew either of her parents. She was raised as an orphan in the Red Room, which famously produced — among many others — Natasha Romanoff, the Black Widow. When it became apparent that she inherited her father's knack for inventing, Nadia was placed in the Red Room's science division, where she reverse-engineered his famous Pym Particles.

Upon escaping from the Red Room, she turned up at Pym's door in the hopes of a father-daughter reunion but was disheartened to learn he'd very recently sacrificed his life to stop Ultron. Deciding to assume her father's legacy, Nadia then created her own Wasp suit and sought out the Avengers, hoping to earn their approval.

After a brief misunderstanding with a mind-controlled Vision, their long-serving butler Jarvis introduced Nadia to her step-mother Janet Van Dyne —the original Wasp herself— with whom she quickly bonded with, readily endorsing her identity as the new Wasp.

Shortly after introducing herself to the superhero community, Nadia joined the new Avengers roster as a full member and, with the advice of fellow crimefighting scientist Bobbi Morse, decided to become a champion for the smartest (and oft-ignored female) minds of the Marvel Universe — making her the Unstoppable Wasp.