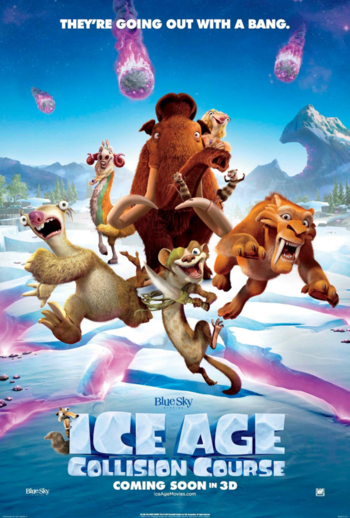 Ice Age: Collision Course is the sequel to Ice Age: Continental Drift, and the fifth film in the Ice Age franchise, released on July 22nd, 2016.

This time around, Scrat's own usual mishaps with his acorn causes him to stumble upon an alien spacecraft that takes him on a wacky misadventure through the cosmos in search of his nut, only to cause impending peril to the Earth, and create the entire Solar System in the process. The Sub-Zero Heroes are forced to leave their own home, and search for answers that will allow them to somehow escape the approaching apocalypse.

This ultimately became the final theatrical film of the series after Disney closed down Blue Sky Studios in 2021. A spinoff, The Ice Age Adventures of Buck Wild, released on January 28, 2022, as a Disney+ exclusive.