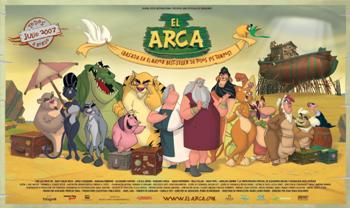 El Arca is an 2007 animated film by Patagonik Animation retelling the story of Noah's Ark, and released by Disney via Buena Vista International.

God feels like The Bible isn't interesting enough compared to Buddhist and Confucian books, so He decides to flood the world in order to create a more compelling story. Two separate storylines run in the film, one focusing on Noah and one on the animals, depicted here as anthropomorphic.

A letter gets sent out to all the animals saying that a pair will be needed to come on the ark in order to survive the flood. The lion prince Xiro volunteers to go after reading half of a torn letter, and picks Bruma, a lioness with vaguely referenced past indiscretions, over Kairel, an apparently fat lioness who helps plan the ark from the animals' side.

Before they board the ark, there is a dispute between the carnivores and herbivores over whether the herbivores would be eaten, which Xiro badly tries to mediate. It starts to rain and in the ensuing rush, a freak accident occurs, resulting in Bruma getting hit by a hippo and crushed to death or drowning.

On the ship, the predators plot a takeover, while Xiro struggles with Kairel to take responsibility. Their plan is to use Panthy, a panthress and nightclub singer, to quasi-seduce Xiro and make him think that he killed a herbivore. It works well enough to convince Kairel, and she runs off.

Meanwhile, Noah gets knocked down a shaft, and his sons fight over who gets the helm of the ship, which ends up running them aground at the north pole. Xiro hears a speech Noah gives to a penguin, thinks that it's God talking to him, and leads the animals out onto the ice to break the ark free. Kairel sees him finally taking responsibility, they drop off the appropriate arctic animals, and God gets the story He wanted for His Bible.

Notable for being a decidedly secular retelling of the story of Noah's Ark, as well as for it's copious amounts of raunchy humor and sexual innuendo in many of the scenes with the animals.

Despite having an English dub, it didn't get an American release until 2014, when Shout! Factory issued a Bowdlerized, family-friendly version under the Market-Based Title Noah's Ark.