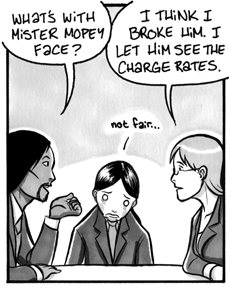 — not to be confused with Yellow Peril, though the reference is intentional—is a Web Comic by Jamie Noguchi (former co-author of Erfworld with Rob Balder).

It is about three disgruntled employees of a soulless graphic design firm, and their dates, friends and relatives. The strip is called that because much of the cast is Asian. The comic last updated in March 2019 and is currently on hiatus due to a combination of the author having to prioritise paid commissions and books with deadlines over the webcomic and the ongoing impact of the COVID-19 Pandemic.