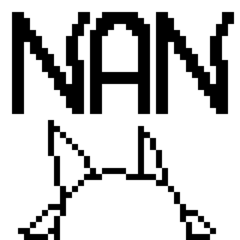 Last thing I remember, I was
Running for the door
I had to find the passage back
To the place I was before.
"Relax," said the night man,
"We are programmed to receive.
You can check out any time you like,
But you can never leave!"
— Hotel California, Eagles
Advertisement:

Spiritual Sequel to the famed Ruby Quest, drawn/written by the same author, Weaver. Nan Quest is the story of Nan, a goat. It ran from October 8th, 2009 to June 6th, 2015, and links to the threads can be found here.

Nan is a repairwoman, and today she is doing some jobs. One in an arcade, and one in a hotel. In the arcade, she fixes a fusebox, gets a check for her services, and some free pizza from the owner. She then bikes off to the hotel with her pizza, where she is to fix a broken outlet. In the hotel... Well.

You can read it in a compiled format here

Now has a character sheet. Note that even the names of tropes listed here can be a huge spoiler, so catching up on the threads first is advised.

After the quest was finished, Weaver hosted a chatroom Q&A session to clear up some lingering questions. A log can be found here,

though of course you should read the quest first if you want to avoid spoilers.