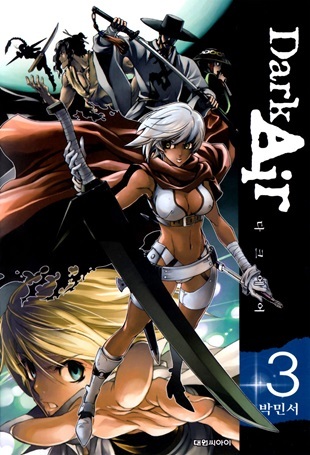 Dark Air (다크에어) is a fantasy/adventure manhwa written by Park Min-seo. It follows the adventures of a young boy mage named Melrose Silvringtinker and his companions, a musician/buffer named Mustain, a swordswoman named Shenandoah and a forest being named Forest Freelander.

One day, all of the Blue Air in the world disappeared, consumed and replaced by a pillar of Dark Air. It sapped mages worldwide of mana, draining them of their powers. All of them but one man: Vincent Zapa, the hero of Peynia, the "Master Lord." Except he isn't the only mage remaining, for Melrose is also still a mage. Though he won't be much longer, not if Zapa and the many, many teams he's sending after him have any say in it. Meanwhile, Mustain wonders where all of the Blue Air went in the first place...