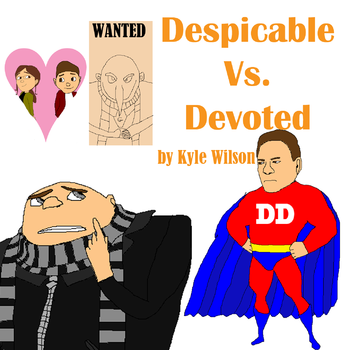 Which is worse? Gru's villainous past coming back to haunt him, or his eldest daughter finding love?

Just because you can give up a life of crime doesn't mean everyone will believe you.

is a Despicable Me fanfiction created by Kyle Wilson

The Gru family is getting new neighbors. And not just any new neighbors: a famous superhero and his family. Devan Preston, better known as Devoted Devan, was a superhero that Gru has had countless battles with in the past, and was also Lucy Wilde's best friend when they were kids. Together with his wife Susan and his son Alex, the Prestons get themselves settled in their new home.

... that is, until Devan finds that the now-repented supervillain Gru is his new neighbor. Consumed by his losses against Gru, Devan only believes that his retirement from villainy is a cover for yet another sinister plot, that the children under his care were being abused, and that Lucy had been brainwashed into marrying him. He vows to bring Gru to justice once and for all, but Gru still wants to try to get along with him for Lucy's sake.

As if that wasn't enough, Alex falls in love with Margo and makes it his sworn duty to win over her heart, awakening Gru's Overprotective Dad instincts. Even worse, the infamous supervillain Hypno-Joe escapes from prison and, believing Gru's repentance is a cover too, wants to persuade him into taking over the world with him—with Susan as his mindless puppet wife.

The story was in the works for many months before it was finally finished on November 10th 2019. On February 8th 2020, Kyle re-released the story on DeviantArt

, adding illustrations to each chapter, as well as a title page (pictured) and concept art of the original characters.

Despicable vs. Devoted provides examples of: