An evil race of aliens set to invade and take over the Earth in Saints Row IV. Not much is known about them aside from the fact that they apparently have access to advanced virtual reality technology which they use to trap the Saints. 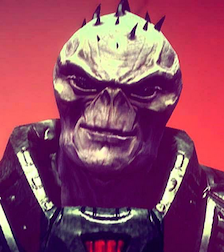 A psychopathic VR Santa Claus created to torment the real deal in his simulation by corrupting the meaning of Christmas and the Big Bad of "How The Saints Saved Christmas".