It's our time now! Let's get this shit started!

The 3rd Street Saints were formed to combat the more violent and destructive gangs that rose to power in their home city of Stilwater. They succeed, but are disbanded a short time after and forced to start over from scratch in the second game. With the help of a former member turned leader, they retake Stilwater once again, though with much less noble goals this time around. As their fame and power grows, they slowly become celebrities and begin to lose touch with who they once were. By the third game, they begin to wonder if they have become sellouts and end up in a new city under the control of a massive crime organization simply called The Syndicate. Crushing the organization, the Saints eventually win the adoration of America when they prevent a nuclear terrorist attack on Washington D.C., only to be drawn into an intergalactic war against the colossal Zin Empire. 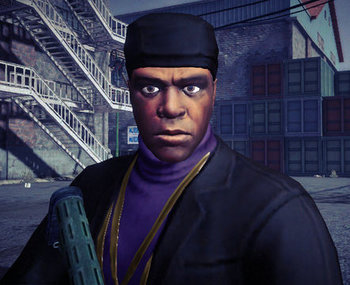 Julius is the charismatic founder and leader of the Third Street Saints in the first game. He saves the main character - who he refers to as "Playa" - from a gang shootout, and offers him a place in the Saints. Julius claims that their goal is to clean up Stilwater and wipe out the rival gangs who are raising hell and generally making life miserable, even if he does make some questionable decisions. He ultimately sells the Saints out and essentially destroys the gang after being caught by the cops, even seemingly killing "Playa" via boat explosion, and gets a job as a tour guide after Mega-Corp Ultor moves in and renovates the entire Row. But Julius' past comes back to haunt him in the form of "Playa", who survived the explosion and wants answers - and revenge.
Johnny

The Saints' second-in-command after Boss from the second game onwards. If there is one thing Johnny is good at, it's racking up a massive body count of rival gang members and law enforcement officers. So long as he has something to blow up or fill full of lead. he'll be happy. In the second game, it's revealed that he married (or is at least living with) his long time girlfriend Aisha, who tragically dies at the hands of a Ronin enforcer during an ambush. In the third game, he is still badass despite the easy life the Saints have had since taking over Stilwater. Unfortunately, he finally meets his end during the second mission of the third game when cornered by the Morning Star and gunned down...

Or so we're lead to believe, after all, Death Is Cheap. As it turns out, he survived by using a Morning Star guard as a human shield against Loren's machine gun, knocking the arms dealer unconscious immediately after. Observing the battle, Zinyak, the big bad of the 4th game, abducted Johnny for fear of him being one of the only humans able to stop him. Locked away in a simulation on his ship where he constantly relived Aisha's death, the Boss eventually rescued him from his digital nightmare in time to fight the final battle against the Zin. 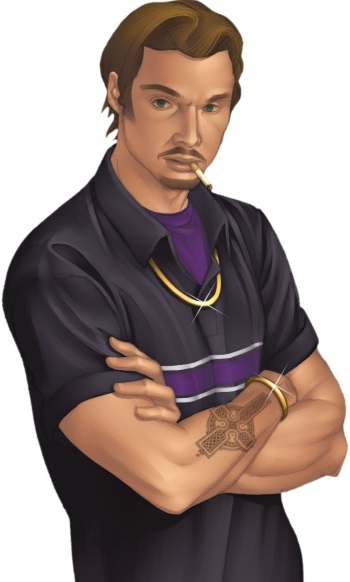 An older member of the Saints who assists Julius in rescuing Playa from a Vice King in the first game. At the end of the first game he is revealed to be an undercover cop and is promoted to Chief of Police by the time the second game rolls around. He leaves the Saints, but remains on good terms with the Boss, whom he kept on life support while he was in a coma between games. 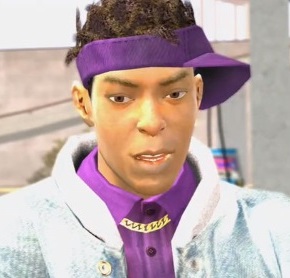 The Saints' very first tactician who seems to get annoyed by the habits of some of the other Saints, such as Johnny's recklessness or Troy's incorrect grammar when talking about Los Carnales. In the second game, he quits the Saints and joins Ultor. After leading both the Boss and Julius into a trap in attempt to kill them both, he is forced to flee the city when the Boss begins hunting him down for revenge. He hasn't been seen since and does not appear in the third game, leaving his ultimate fate unknown.
Aisha 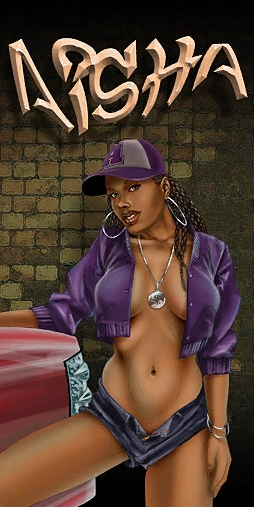 Stilwater's "Local girl done good."
A celebrity hip-hop recording artist with an exclusive on-and-off relationship with Johnny Gat. She had experienced a meteoric rise that had taken her from the slums of Saint's Row to a promising career in the R&B/hip hop/hip hop soul music industry. Aisha released 2 CDs; Avarice, which was her debut album, and The Other Six which spawned three hit singles: "Bounce Like My Checks", "Leave The Ho" and "Don't Fuck Me Like I'm Your Wife". In the first game, she enlists the 3rd Street Saints help to rescue her sister, kidnapped by the Vice Kings and fake her death to escape the harsh celebrity lifestyle she was placed into. In the second game, she continues to maintains a low profile, but is tragically killed by rival gang member Jyunichi of the The Ronin gang, and has a funeral shortly thereafter, interrupted and ruined by the same gang's leader, Shogo. With the protagonist's help, Johnny Gat kills both Shogo and Jyunichi, destroys the Ronin gang, and avenges her death. She doesn't make an appearance in the third game but returns in the fourth one albeit a virtual figment of her real self. She once again makes an appearance in Gat Out of Hell, in an ending where she reunites with Gat in Heaven after nearly 20 years apart.
Lin 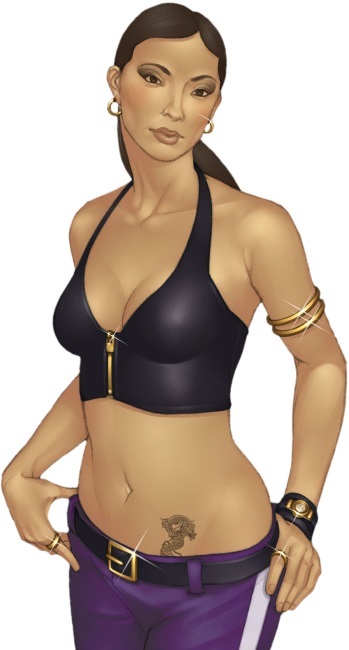 A female lieutenant who goes undercover in the Rollerz gang to destroy them from the inside with the help of Playa. Sadly, she is found out by their leader and is trapped in the trunk of a car with Playa after being shot. While he is able to escape to avenge her, Lin either drowns or bleeds out before she can be rescued. Though she only had a major role in the first game, she gets several mentions in both the subsequent games.
Benjamin 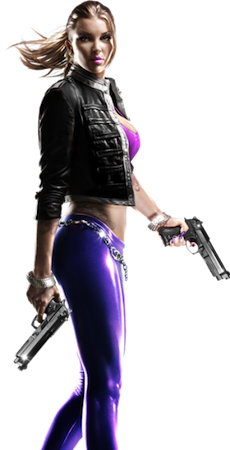 One of the Saints' lieutenants, Shaundi starts as a stoner/college dropout/hippie type who Really Gets Around and is almost always under the influence of some kind of drug. However, she's still a very efficient member of the Saints, and the countless people she knows provide the Saints with tons of leads regarding the rival gangs. But in The Third, she's become a lot more serious and focused - especially after Johnny Gat is killed. During the events of Saints Row IV, she overcomes her survivor's guilt and makes peace with her past self.

She also appears in How the Saints Save Christmas as a mostly bald cyborg who gets Boss to...well, save Christmas. 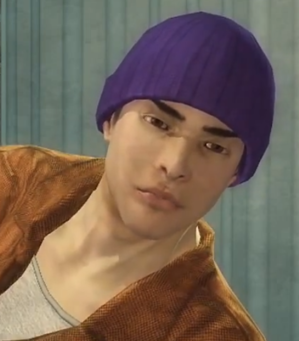 The first person the Boss meets after waking up from their coma, Carlos proceeds to help them escape from prison and return to Stilwater. This effectively acts as his foot in the door into the Saints (which his brother was a member of before they disbanded), and the Boss recruits him as a lieutenant. He's young and inexperienced, but genuinely tries, and the Boss appears to see him as a bit of a younger brother figure. 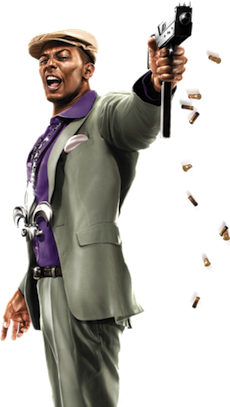 One of the Saints' lieutenants, Pierce starts off as an efficient if rather whiny tactician who keeps having ideas taken from him and is rarely, if ever, given any respect. By the time of The Third however, while he's still a bit of a Butt-Monkey, he gets way more respect and is more of a slickster type. In his free time, he enjoys playing chess and listening - and occasionally singing - to classical music and soft R&B.
Introduced in Saints Row: The Third
Josh 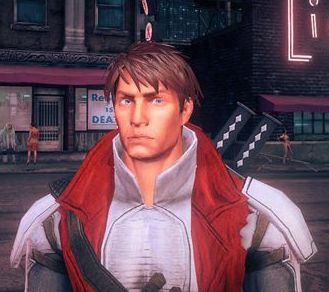 As NyteBlayde
An actor set to star as a member of The Saints in an upcoming movie and the star of Nyte Blayde. To get the real experience of being a Saint, he tags along on a bank heist with The Boss, Johnny Gat, and Shaundi (who he has a massive crush on).
Oleg 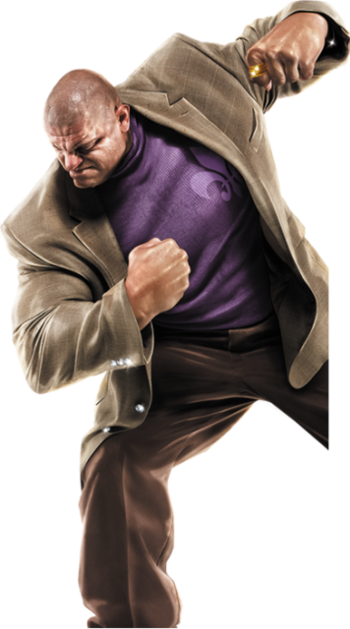 A rather massive ex-KGB super soldier who was captured by the Syndicate and cloned in the hopes of developing a private army. He gets freed by the Saints during the raid on the Syndicate Building at the end of Act I.
Kinzie

A former FBI intelligence agent who was kicked out after she threatened to expose Matt Miller's crimes, causing him to retaliate by destroying her reputation. She becomes the Saints' new tech expert after they rescue her from a Deckers-owned barge.
Angel 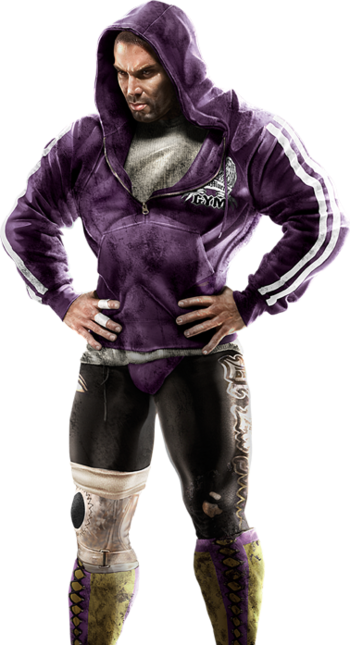 A former luchador who was once part of the Pale Horsemen tag-team with Killbane. The two formed the Luchadores gang, but Killbane's ego took a hit due to Angel's better popularity with their subordinates. As a result, Killbane de-masked him, causing Angel to leave in shame.
Zimos

Played by: Keith David
Appearances: Saints Row IV |How the Saints Save Christmas 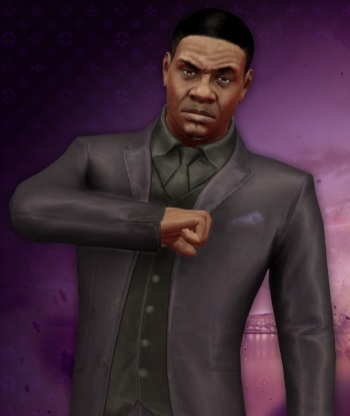 The legendary actor and Vice-President of the United States, which makes him the second-in-command after the Boss.
Asha

Played By: Rebecca Riedy
Appearances: Saints Row IV | How the Saints Save Christmas | Saints Row: Gat Out of Hell 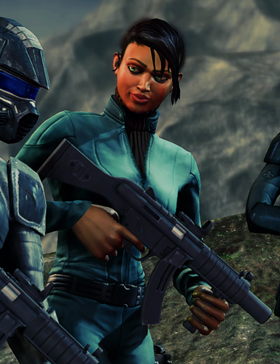 A new member of the Saints in the fourth game, Asha Odekar is a member of MI6 and acts as a liaison for the CIA. She and her handler Matt are the first to try and warn the Boss of the Zin invasion, since no one back in England believes them. Unfortunately, neither does the Boss until it's too late.
CID

Played By: Michael Yurchak
Appearances: Saints Row IV | How the Saints Save Christmas | Saints Row: Gat Out of Hell 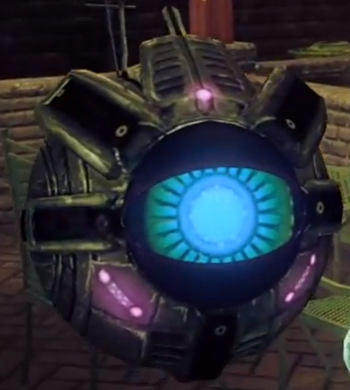 An A.I. the Boss runs into while exploring Zinyak's virtual version of Steelport. He was a dissenter of Zinyak's empire, and while his physical body was killed, he managed to upload his mind into cyberspace. He agrees to help the Saints in exchange for a robot body to upload his consciousness into and later a date with one of the female crew members. Background chatter from the announcers in Prof. Genki's Mind Over Murder show heavily implies that he used to be the king of a planet that was conquered by the Zin, who tried to challenge Zinyak directly for his people's freedom. After beating every challenge Zinyak threw at him, Zinyak separated his mind from his body and trapped it permanently within the simulation.
The Narrator

Played by: Eden Riegel
Appearances Saints Row IV | How the Saints Save Christmas | Saints Row: Gat Out of Hell 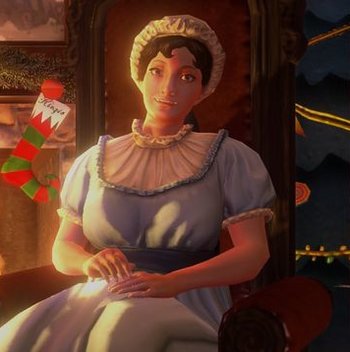 The famous author from the late 18th-early 19th century. Zinyak used his time travelling capabilities to travel back in time and abduct her to add to his collection of humans. She serves as the narrator of Saints Row IV, How the Saints Save Christmas, and Gat out of Hell after the Boss frees her from captivity.