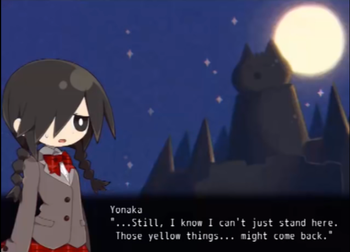 Pictured above: A lost lamb, seeking sanctuary from a pack of wolves, heads for the wolves' den.

Yonaka: J-just what is this?! This place... and those creatures…!! They tried to capture me! Why? What are they after?

A Japanese schoolgirl who was on her way home to see her brother, only to fall asleep on the train and find herself stranded in the Mogeko world. Now she has to make her way through the mysterious Mogeko Castle to find a way back home. 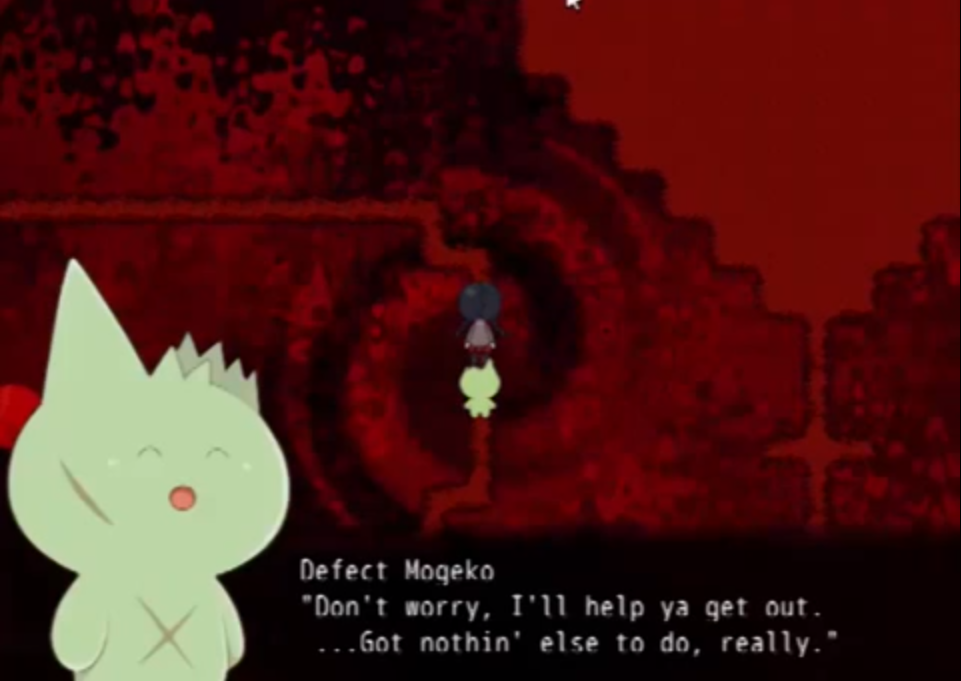 Uplifting encouragement from your stalwart sidekick.

A strange green Mogeko locked in a cell with Yonaka. Unlike a majority of the other Mogekos, he has no desire to pursue her and helps her escape Mogeko Castle. He's revealed to be the final Special Mogeko, and he performs a Heroic Sacrifice to help Yonaka escape. 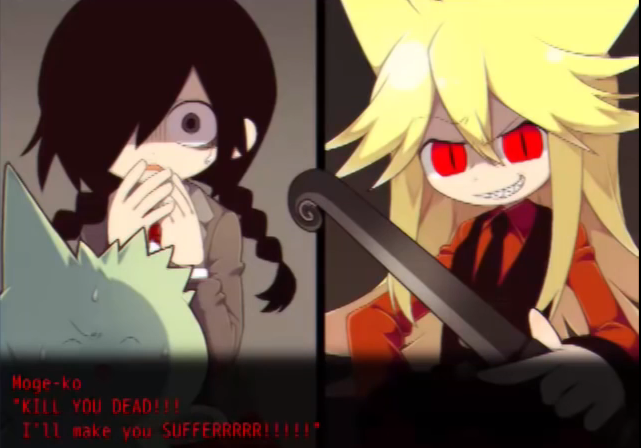 Moge-ko's eager to play with her two new toys.

A homicidally insane human-Mogeko hybrid girl who rules over the fourth floor of the castle with an iron fist. Originally created to be the perfect little girl for the Mogekos to have their way with, they screwed up the recipe, using cement instead of candy. The result is less than pleasant. 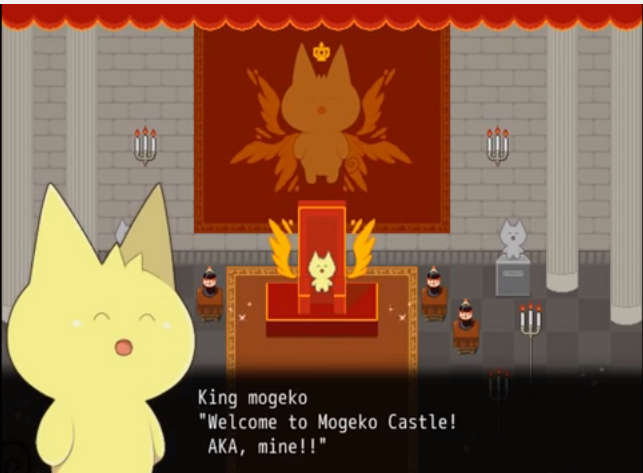 The leader of all the Mogekos and the owner of Mogeko Castle. 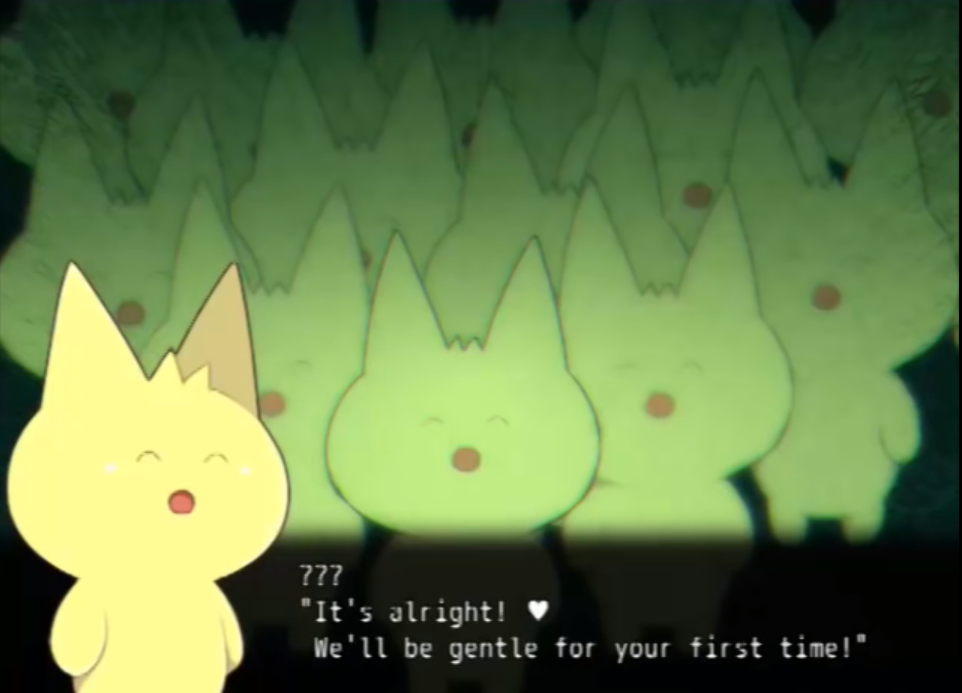 Mogeko: Come! Let us play! In a sexual sense!

A species of small catlike creatures who bring high school girls to their world and engage them in sexual activities. 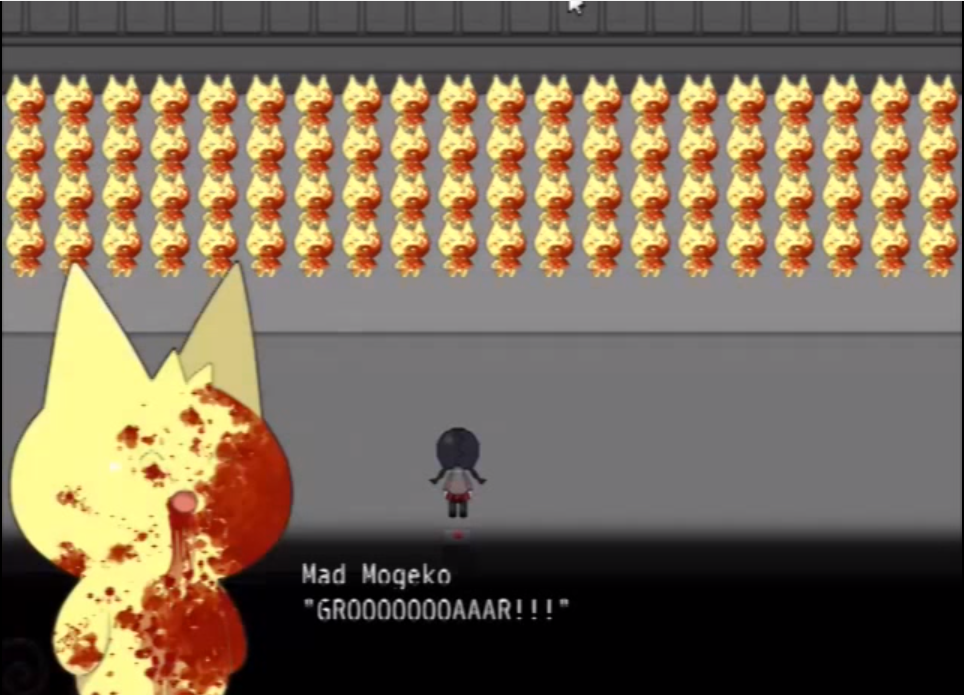 Hordes of Mogekos who are all homicidal and insane. Most of them have been locked up behind bars. 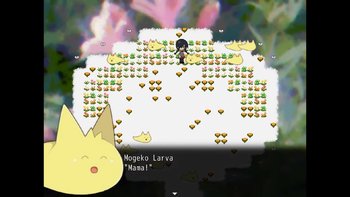 Mogekos start life so cute and innocent. At least they stay cute when they're older.

Infant Mogekos, who have yet to become depraved monsters. 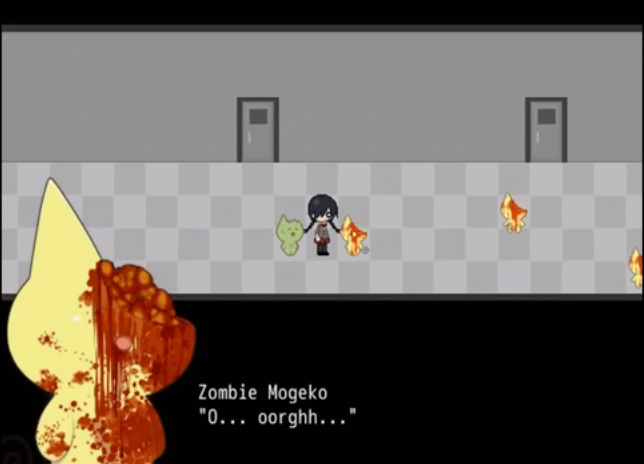 No, really: you don't fight them. And they don't fight you. Yes, this is still supposed to be a survival horror game... 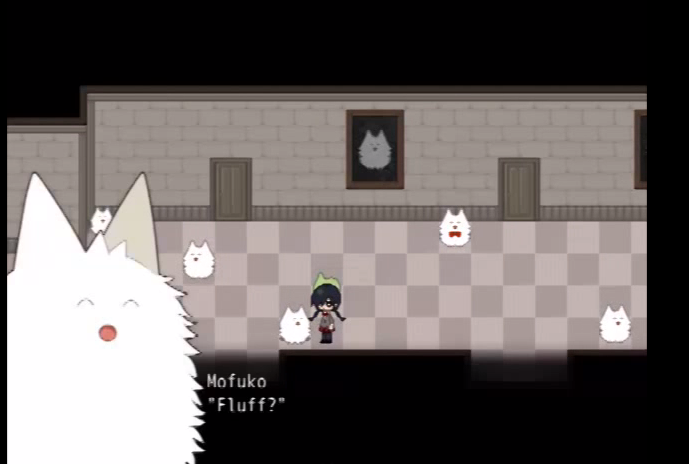 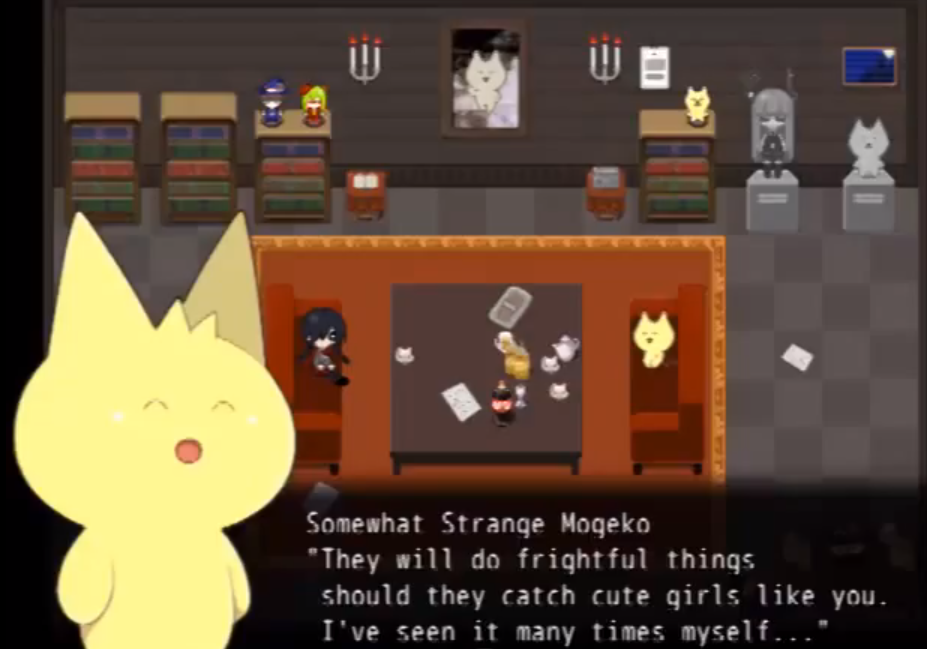 Somewhat Strange Mogeko: No need to fear me. I won't attack you. I much prefer... to just sit here and drink tea, you see.

The Special Mogeko of the castle's first floor. 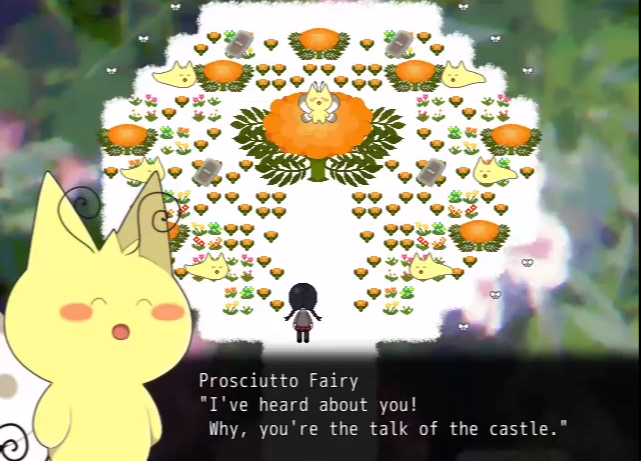 Mostly, the talk centers around her body and what they'd like to do to it.

Prosciutto Fairy: They're a noisy bunch, aren't they? No decency, I say. That's why I hate them so. Why must we be on the same floor, I swear.

The Special Mogeko of the castle's second floor. 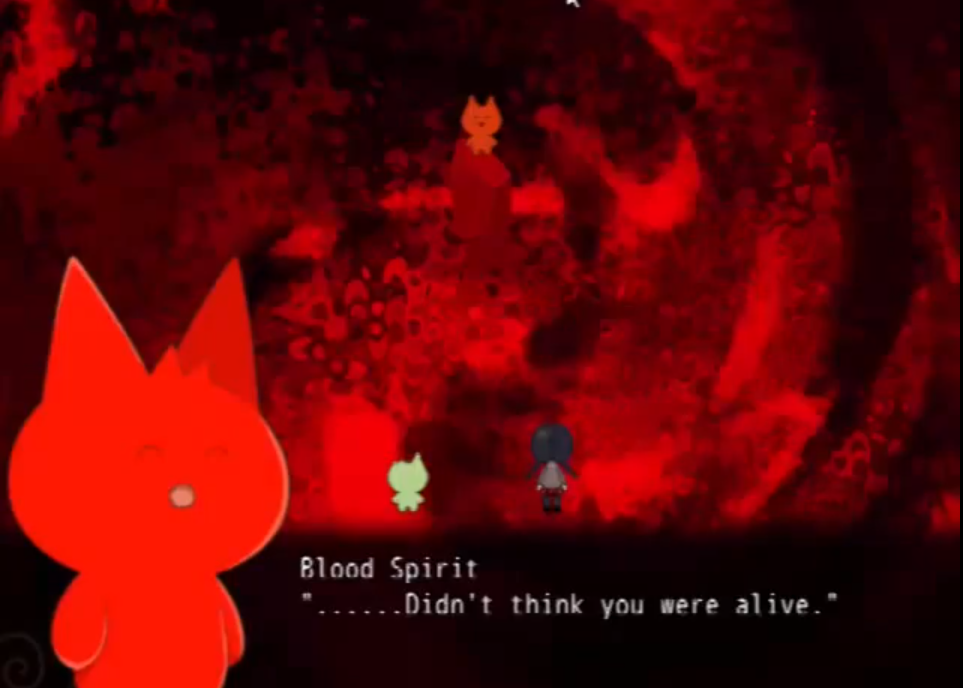 Could I offer you two some cherry juice?

Blood Spirit: Be careful. You know what awaits there.

The Special Mogeko of the castle's third floor. 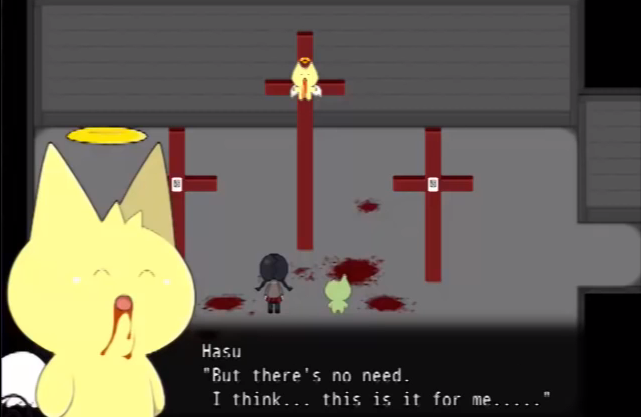 He was just too good for this sinful castle.

Hasu: I wanted to play with you all again.

The Special Mogeko of the castle's fourth floor. 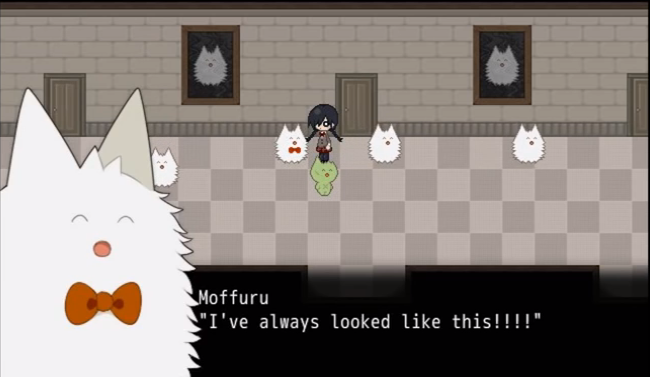 Moffuru: Yes, I've had the monster mistake me for a Mofuko and nearly eat me many a time.

The Special Mogeko of the castle's fifth floor. 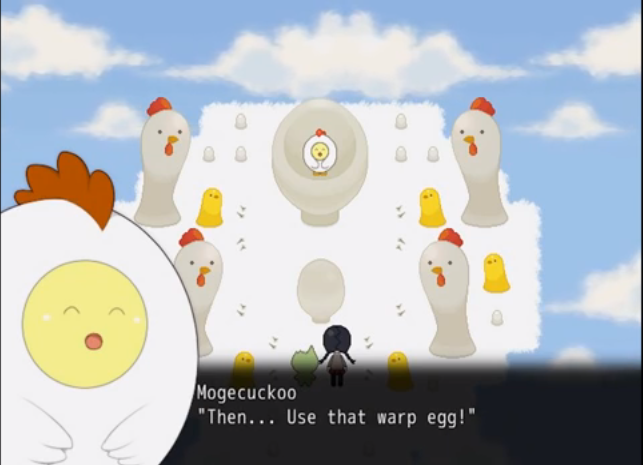 Anyone else suddenly got a hankering for rotisserie?

Yonaka: Why's a bird in the library?
Defect Mogeko: No real reason.

The Special Mogeko of the castle's sixth floor. 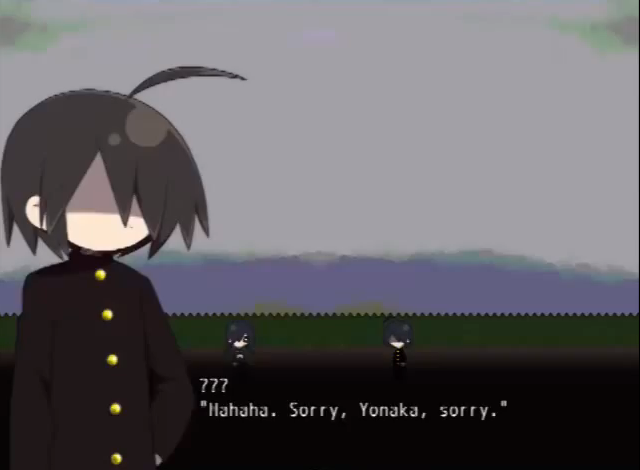 Shinya's a kid who knows when he has things to apologize for.

Shinya: That's right. …..It's exactly what you think. 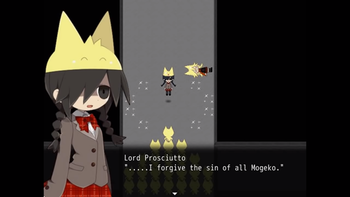 The awakening of a god

Lord Prosciutto: .....I forgive the sin of all Mogeko.

A god related to prosciutto who the Mogekos seem to venerate when not thinking about schoolgirls. 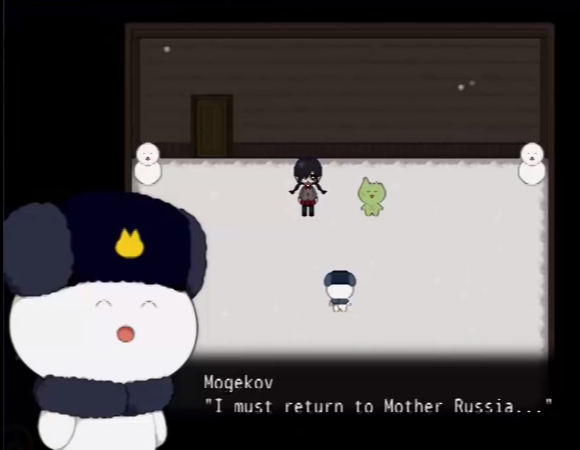 Look me up in Moscow sometime. And this game's sequel.

Mogekov: Now let me say this, human, I was NOT crying, understood?! Absolutely not!!!!!

A Hashasky-human hybrid that serves as a underling for the General. 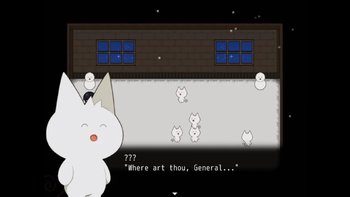 Creaturs that look extremely like Mogekos, except their fur is white.