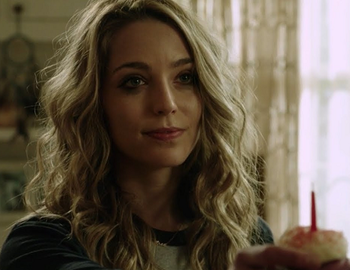 The protagonist of both films.

A nursing student who is Tree's roommate.
Carter Davis

A university student who brought Tree to his room after she blacked out from partying hard. Not the type of guy whose bedroom Tree would normally wake up in.
Ryan Phan

The first film's main antagonist, Lori turns out to be plotting Tree's murder out of jealousy of her affair with Dr. Butler and spite towards her Alpha Bitch tendencies.
Babyface Killer II (UNMARKED SPOILERS FOR THE SECOND FILM)

The second film's main antagonist, Dr. Butler turns out to be plotting to kill Lori and his wife after his affair with Lori comes out.

A serial killer who escaped from the hospital the same night Tree was killed.

A medical doctor and university professor who cheats on his wife.
Danielle Bouseman

The leader of Kappa Pi Alpha.

A freeway/highway cop who pulls over then arrests Tree for speeding plus other charges Tree lied to him about such as driving under the influence of drugs and alcohol.
Becky Shepard
"I missed breakfast."
Portrayed by: Cariella Smith
A black member of Tree's sorority who dumps chocolate milk on Tree.

An Asian member of Tree's sorority. She wants Tree to acknowledge her.
Stephanie Butler

Gregory's wife, who is oblivious to the fact that her husband is cheating on her.