The titular protagonist of the "Shinemon" arc. The self-styled manager of Card Capital who seek to prevent the shop from being taken over by Esuka.

He uses a Genesis deck which focuses on gathering 5 Force Gift Markers on the vanguard circle to open an Astral Plane, allowing him to play the powerful Astral Deity units, including the Grade 5 Giant Deity of Distant World, Valkerion.

Shinemon's best friend who assist him in defending Card Capital. He has an interest in Japanese history.

Mark plays a Nubatama deck spearheaded by Evil Stealth Dragon, Akatsuki Hanzo. On top of the clan's signature hand destruction tactics, his deck focuses on calling Evil Decoy Tokens which lack power of their own but can intercept from the back row.

Shinemon's mentor in cardfighting as well as Mikuru's older brother. In spite of this, he does not involve himself with Shinemon's defense of Card Capital.

He plays a Nova Grappler deck with Fighting Fist Dragon, God Hand Dragon as his ace. His playstyle revolves around using the skills of his units to make the effects of his Front triggers more potent and using God Hand's ability to gain an extra drive check to increase his chances of revealing triggers. He later gets a Gear Chronicle from his boss Ryuzu which focuses on Chronojet Dragon in order to test its strength.

A transfer student attending the same school as Mikuru. He quickly comes to look up to Shinemon after seeing him defend Card Capital and seeks to become his disciple. Following the timeskip, he works at Ryuzu Lab.

Tatsuya uses an Angel Feather deck, using the clan's ability to swap cards in hand with those in the damage zone to strengthen his defenses and get the cards he need. Post-timeskip, he rebuilds his deck around a new ace monster which lets him revive units at the cost of damaging himself alongside cards which synergize with the Protect II gift marker.

Shinemon's niece who as a result of the accident that killed her parents is currently in the hospital.

Rive's younger sister and a first-year middle school student at Harumi Middle School. She often acts as a voice of reason in regard to Shinemon's antics and her older brother's behavior.

A stray cat who followed Shinemon during one of his schemes to drive Esuka away and has since taken up residence in his hair.

Misaki's parents and the previous owners of Card Capital, of which Mr. Tokura was also the manager. They died in a car accident before the start of the series.
Advertisement:
Card Shop Esuka 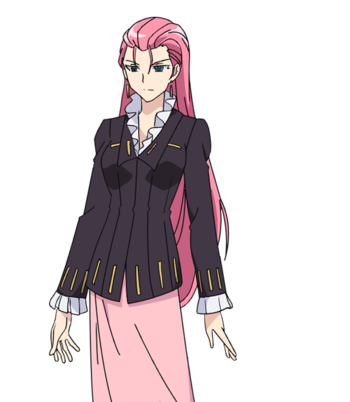 The owner of the eponymous chain of card shop who seeks to add Card Capital to said chain.

Esuka's deck features the Great Nature clan and is spearheaded by Holy Great Sage of Black Shadows, Isabelle whose skill allows her to obtain both effects when using one of the clan's "Lottery" abilities. 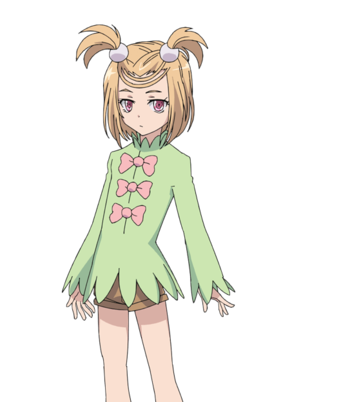 A S-Rank fighter of Esuka who holds the position of Number 1. She is fond of cats. Post-timeskip, she is part of Team SSS alongside Kanzaki and Tonori.

Nanami uses a Neo Nectar deck the Grade 3 Arboros Dragon, Sephirot as her ace. Her playstyle involves making of use of the clan's ability to call tokens in conjunction with the skills of the Arboros units's abillity to alter the tokens created into stronger ones that have both boost and intercept, making them useful for both offense and defense. 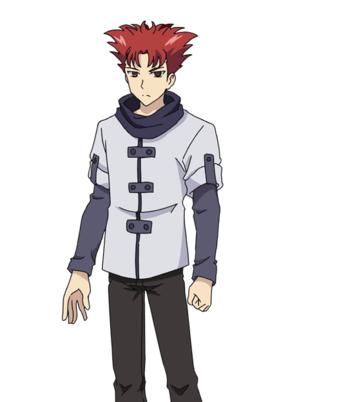 A young man who is the Number 2 amongst the S-Rank fighters of Esuka. He has a large appetite and will become angry if he goes without eating for too long.

Tonori plays a Gold Paladin deck with Knight of Fury, Agravain as his main grade 3. He relies on the clan's ability to superior call units from the deck to build his field and pressure his opponent early on while he relies on Agravain's ability to call new units during the battle phase at the cost of his entire field to finish the fight. 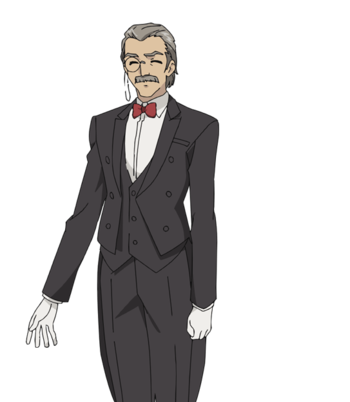 Esuka's butler.
Team Dragon's Vanity
A special team assembled by Esuka to participate in the S-Cup with the objective of defeating Shinemon and Team Capital. It is comprised of three strong and well-known cardfighters.

A vanguard fighters who holds the belief that Vanguard should be fun and who enjoys each and every one of his fights.

He plays a Narukami deck focused on Dragonic Vanquisher. In addition to binding his opponent's rearguards, his cards can also bind from both players' hands, further weakening his opponent's ability to defend themselves.

A vanguard fighter who previously won the National Championship twice. He has a history with Rive, having once been part of a duo of Vanguard fighters alongside him.

He plays an Aqua Force deck which contains Blue Wave units and spearheaded by Last Card, Revonn. He supplement his clan's aggressive strategy by being able to use Revonn's skill to reduce the power of the opponent's vanguard. His playstyle diverges from the usual playstyle for Aqua Force in that it counts the number of units in rest position instead of the number of attacks.

The champion of the World Vanguard High School Championship for three consecutive years. After the timeskip, he participates in the Asia Circuit as part of a team with Nanami and Tonori.

Kanzaki's clan of choice is Shadow Paladin with his ace being Claret Sword Dragon. His strategy revolve saround accumulating Grade 1 units in the drop zone through various means in order to be able to use his units's skills, like Claret Sword Dragon's self-standing ability.
Ryuzu Lab
A laboratory headed by Ryuzu Myoujin which conducts experiment related to Vanguard with the goal of proving Planet Cray's existence and creating a connection between it and Earth. For Tatsuya Tachibana's entry, see above under the Card Capital folder.

Voiced by: Keiichi Nakagawa
The director of Ryuzu Lab and an old friend of Rive Shindou. He believes in the existence of Planet Cray and conducts experiments meant to summon units to our world.

He plays using a Gear Chronicle deck which focuses on Chronofang Tiger and its ability to superior ride Grade 4 units like Chronotiger Rebellion. His playstyle involves intentionally reducing the number of cards in his hand to unlock the full extent of his units's abilities as they become stronger the less cards there are in his hand.

Voiced by: Haruka Tomatsu
The assistant of Ryuzu Myoujin. She works for the lab's financial sponsor and act as their proxy.
Other Characters

The president of the Harumi High School Broadcasting Club. He is one of the commentators for the Esu Cup.

A popular idol who has recently announced her retirement. Also an acquaintance of Esuka who invited her to Card Capital on Christams Eve. She is the mother of Saya Yatomi from Vanguard G.

She has a Bermuda Triangle deck but due to being unfamiliar with the rules, all of the cards in it are copies of Top Idol, Riviere.

Rive's wife with whom she has a son. She is revealed to have died during the timeskip.

Voiced by: Takumi Mano (teenager) & Mariya Ise (child) [Japanese]
Rive and Tokimi's son who was born shortly before the beginning of the series.

He has a Gear Chronicle deck featuring Chronojet Dragon as his ace card.