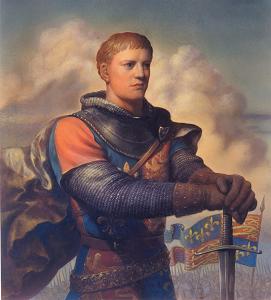 "This star of England..."
"Once more unto the breach, dear friends, once more!
Or close the wall up with our English dead.
[...]
Follow your spirit, and upon this charge,
Cry 'God for Harry, England, and Saint George!'"
— King Henry V , Henry V III.i

Henry V (or to give its full original title, The Chronicle Historie of Henry the fift: with his battel fought at Agin Court in France. Togither with Auncient Pistoll.) is a play by William Shakespeare, in which Henry V (the former Prince Hal from Henry IV, Parts 1 and 2) goes and beats the French in one of the most spectacular military victories in English history. And then marries Catherine of Valois to boot, uniting England and France under one heir and setting the stage for Henry VI (already published by Shakespeare).

Expect that speech to be quoted by someone when England has a major sporting match. Well, one of two:

Expect varying interpretations when this play is performed — it's debated whether it's pro- or anti-war...or a character study.

Henry V has been adapted twice in film: the first in 1944 by Laurence Olivier, the second in 1989 by Kenneth Branagh (featuring BRIAN BLESSED, Emma Thompson as Katherine, and a very very young Christian Bale as Falstaff's page). There are several television versions, including a 1979 presentation that was part of BBC Television Shakespeare which was directed by David Giles, and starred David Gwillim as Henry. There is also the 1989 television version with Michael Pennington (best known as Moff Jerjerrod in Return of the Jedi) as Henry, which is part of a live taping of War Of The Roses, a series of plays by the English Shakespeare Company, directed by Michael Bogdanov. And more recently, there is also the 2012 BBC version with Tom Hiddleston as Henry as part of The Hollow Crown series.

The plot structure is the template for just about every war movie ever made.