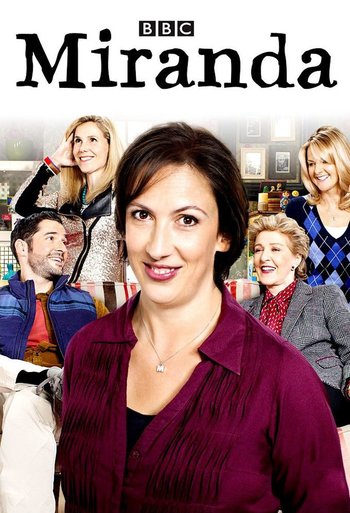 Miranda was a Britcom created, written by & starring Miranda Hart that aired on The BBC from 2009 to 2015.

Derived from her earlier radio comedy Miranda Hart's Joke Shop, it follows Miranda as she stumbles through life from one "Fawlty Towers" Plot to another, much to the embarrassment of herself and her loved ones, which include her mother Penny (Patricia Hodge), best friend and workmate Stevie (Sarah Hadland), love interest Gary (Tom Ellis), and old frenemy Tilly (Sally Phillips), while other recurring characters include Gary's boss Clive (James Holmes), Miranda's eventual new boyfriend Mike (Bo Poraj), and an unnamed customer who keeps getting involved in Miranda's schemes (Dominic Coleman).

The series ran for three seasons and a two-part finale special, ending with Miranda and Gary finally getting married. At the height of its popularity, it became one of the few shows to jump from BBC Two to BBC One, and received new attention from American viewers when it began streaming on Hulu in the US.

In 2020, Call Me Kat, an American counterpart, premiered on FOX. Hart is a producer of this remake alongside The Big Bang Theory star Jim Parsons.

If you want to know about your right to remain silent, you want Miranda Rights instead.