Nails on a Blackboard
aka: Nails On A Chalkboard 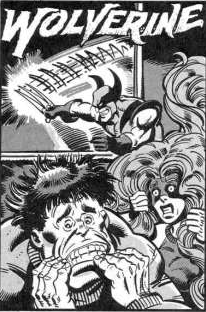 A sub-trope of Noisy Shut-Up.

But it got your attention, didn't it?

Seriously, there's no better way to arrest attention than to screeEEEEeeeeEEEEEeeEEEEEEEK!

[shudder chill] ...no better way to arrest attention than to rake a nail or two across a blackboard. Usually works best with actual nails or a piece of chalk (especially a long, fresh piece), but some Badass Normals can use their finger nails. In the absence of a chalkboard, a sharp object against glass produces a similar sound.

Will you STOP that!!!

Fun fact: certain schools of thought posit that the reaction to this sound is an atavistic response to when humanity's pre-evolved ancestors used a similar noise to warn each other of danger that should be fled from at once. This phenomenon was studied in 2006 on a scientific paper

, which netted its authors the Ig Nobel Prize

See also Sinister Scraping Sound, a dangerous Sister Trope. Believe it or not, The Other Wiki actually has its own article