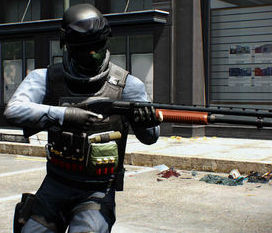 The Washington Police Department, who are the most common enemy the Payday gang will face. They are there to protect and serve the public, with the priority to detain the threat and rescue the hostages. It begins with patrol officers who was unfortunate enough to be on duty to respond to the call, before the SWAT units are called in after recognizing the threat. Although dependent on the heist, SWAT can be called in immediately. They are normally faced on easier difficulties, and do not show up as often in harder levels. The SWAT team appear to be responsible for the SWAT Turrets. 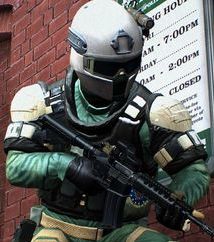 When the MPD SWAT team just cannot get the job done, the next one up the food chain is the strike team from Federal Bureau of Intervention. While you do see some FBI agents in the area on lighter difficulties, they start getting more involved from Very Hard and onward. 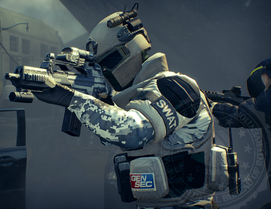 The fictional security company that has security systems and guards in place in many heists where stealth is an option. With every heist, they step up their security measures, may it be more guards than possible to get by, extra security measures, or simply making some vaults impossible to penetrate (but still have a weakness somewhere). They appear to be responsible for most of the law enforcement specialists you see on the field, especially bulldozers. On Mayhem, they provide equipment and training to SWAT officers, make them the deadliest of all the mooks available, and even provide better armor and weapons. For good measure, they even upgrade their bulldozer with even heavier armor, and an LMG.

A PMC organization who claim to specialize in security. However, Bain recognizes them as being thieves and looters who will shamelessly steal anything of value while over seas. They appear to be as deadly as the FBI response teams. Originally only available in the Shadow Raid (where plan B isn't an option), they eventually show up in Hoxton Revenge, Meltdown, Birth of Sky, and Beneath the Mountain. They are also the primary enemies faced in Henry's Rocknote  originally, this was not the case, but Update 195 changed this, Hell's Island and The White House.
Overkill MC
An American motorcycle gang that is known to be very dangerous, and the most organized of the gangs the Payday crew can face off with, the cartels not withstanding. They are encountered on Big Oil day 1, and the Biker Heists. They were hired by the Elephant (having been an affiliated member in the past) to acquire intel on the scientist's loft to capture the fusion engine prototype, but had since went rogue, forcing the Elephant to hire the Payday gang to finish the job. In the Biker Heists, they have their hands on a special government weapon that is worth a lot on the black market.
Grigori Beria AKA "The Commissar" 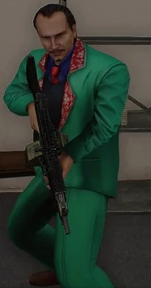 You can't has Commissar!

The boss of the Russian mafia, otherwise known as the Commissar, is known to be quite wealthy and influential. Quite influential to the point where he has the district attorney under his hands. In order for the Dentist to help arrange for Hoxton's breakout, the Commissar had to be taken out. He also has enough influence to put the police on his side, AND summon a gunship* actually a civilian helicopter outfitted with missile pods and a cannon, which was never used to his aid!

Solomon Garrett
The head of the newly created task force specifically created to take out the PAYDAY gang. Commissioner Garrett originally worked with the Boston Police Department and his aggressive leadership helped bring down both the Irish and Italian mobs and earned him the nickname "Old Thunderguts". Now he has set his sights on Bain and his gang and is determined to bring them down.
Russian Reapers
A Russian mercenary group hired by Akan to defend the hidden laboratory in Russia, and to safeguard the test subjects inside. They are exclusive to Boiling Point, a Heist added as part of the Hardcore Henry heists. They behave much the same as the enemies the Payday crew faced before, except they are more resilient and hit even harder.
Los Federales
The Mexican federal police, tasked with keeping the powerful South American drug cartels at bay. As such, the government has staffed them with veteran officers equipped with modern, state-of-the-art equipment in a effort to mirror their US counterparts. They are currently exclusive to the San Martín Bank and Breakfast in Tijuana heists.
Necro Cloaker

A malevolent entity who appears in the three Halloween event jobs, the NecroCloaker takes the appearance of a gigantic Cloaker, and rules the realm of nightmares that the PAYDAY Gang find themselves in around All Hallows' Eve.

ZEAL Team
With crime rates high in Washington, and the WPD's continued inability to apprehend the Payday gang, the Department of Homeland Surveillance decides to become more involved in the clown case, despite Commissioner Garrett's disapproval. They respond to the PAYDAY gang by presenting the ZEAL Team, presenting a military-grade arsenal and even deadlier troops for the clowns to contend with. They only appear on the Death Sentence difficulty when the job goes loud.

Ernesto Sosa
A kingpin of the Sosa Cartel that runs operations in Miami, Florida. He appears to be a descendant of Alejandro Sosa from Scarface, who was responsible for the assassination of Tony Montana, and had since taken over his mansion. The Butcher was expanding her operation in weapon laundering in Miami, Florida, but was intercepted by Sosa's cartel, who murdered her crew, pillaged the merchandise and burned the boats, then sent photos of the damage to her as a warning. In response, the Butcher hires the Payday gang to have Ernesto assassinated.

Similar to Tony Montana, Ernesto appears to be very paranoid, hiring internal security forces, locking up his mansion tight with security doors, and even has Tony's own security camera system as operational as they once were.

Matt Roscoe
A former driver for the gang from the first game. After the events of the first game, he was incarcerated in prison, and was set free and subsequently got into some dirty dealings with a mysterious and unknown organization, who are out to destroy the PAYDAY Gang. Since he hates the PAYDAY gang as much as whoever his employers are, Matt accepted. Soon after, Vernon Locke gets involved with information regarding the PAYDAY Gang, which leads the gang to find Matt Roscoe. He re-appears in the remake of "Heat Street", with similar motifs of crossing the gang.
Buluc
The head of the Coyopa Cartel, who has a long-standing rivalry with Vlad. The primary target of Biluc's Mansion.