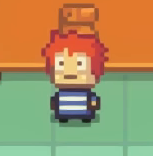 A redheaded kid who dislikes the new kids on the block (you and your classmates from the first game). Misses his three friends who were consequently transferred out. Likes to play with his toy robot, but its battery is dead.

Nicknamed "Ted" by most students and "Teddy" by his brother, he comes from a rich family who owns Applesoft, a large corporation, and is Felix's twin brother. He is bullied by Felix into doing whatever his brother wants, who uses the reason that he will be the one in power when the two of them inherit their family's company (due to being more intelligent and talented at business) for this purpose. However, Felix often forces him to do nothing and rarely talk to others, as there is not much he can use Ted to do. As such, he is helplessly submissive towards Felix and does nothing even when he is without his brother in the normal class (or, as Felix puts it, the "stupid class"). When he gets told by Felix that they need to kill Ozzy to save their inheritance, he attempts to carry out his own version of the plan in his route to prove his worth as an heir.

Ted's twin brother, from a rich family who owns Applesoft, a large corporation. His background causes him to be extremely arrogant and rude towards kids he thinks are poor. Despite this, however, he is indeed intelligent and a good businessman. Ted is submissive to him as he is the smarter one (leading him to belittle Ted) and he usually does not allow Ted to speak with others or do anything else. He ropes Ted into a plan to "save their inheritance" by killing Ozzy. Unbeknowst to Ted, the plan is actually to kill him and make Felix the sole heir.
Carla 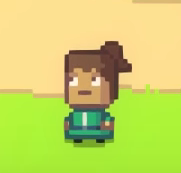 A girl whose intuition and intellect has allowed her to identify the various suspicious occurrences at the school and avoid danger more than the rest of the kids. She tries to help you adjust if you talk to her by introducing you to the suspicious occurrences, such as Penny, The Stool Pigeon of the school, and offers various services that allow you to break school rules without repercussion if used correctly.
Penny 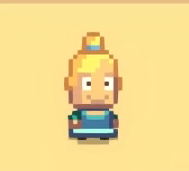 Hello! My name is Penny! My mommy is the principal! You must be one of the new kids. It's so nice to meet you.

The daughter of the new principal. She is extremely friendly and sociable, to the point that it can be considered unnatural and creepy, causing all the kids to ignore her and her to have no actual friends despite her personality. Described as a "living metal detector" by Carla, she always knows when someone is carrying something that they shouldn't have at school. As the principal's daughter, she acts as her snitch/spy by reporting kids with contraband or who break rules to her. Unbeknownst to the kids, she is actually fitted with machinery specifically made to detect and report these actions to the new principal.

Madison, Ron and Alice (Spoiler Warning)
Three students who were supposed transferred away from this school over to different ones. In actuality, they are being held captive by the principal for her twisted experiments. Madison is Ozzy's girlfriend, and Alice states that she doesn't even go to this kindergarten, attending another school. Ron does not play any role, aside from being the boy of the trio. 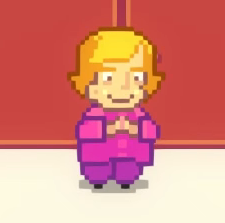 The principal of the new kindergarten. While her name is not given, she is Penny's mother. She seems to be friendly and helpful towards the students, but her ability to keep the school safe seems limited considering the same endless potential for deaths in the new kindergarten.

Tropes applicable as a mutant 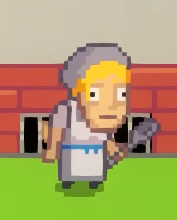 The new lunch lady and the new principal's sister, who is noticeably unstable. She often refers to the students as "child" with literal adjectives placed before them (such as calling Ted the "unconfident wealthy child") and displays psychotic tendencies which may lead her to kill you, but when she is not set off she is relatively pleasant towards you and the other students. 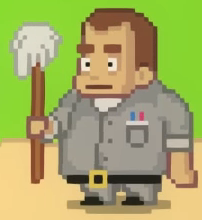 The new janitor of the school, who shows to care deeply for the kids.

Dr. Danner
The new teacher of the school. He serves as the teacher for the Smart Class and Science Class. He is also the one who monitors the students that are sent to Study Hall.

Stevie
The new hall monitor who works alongside the original hall monitor. He takes his job even more seriously than the other one, to the point where he is genuinely passionate about his job. Unfortunately, he is often killed, attacked, or forced to allow you to break rules, and is often victim to monitoring distractions caused by a single student while others create a much larger problem. The original hall monitor, being much more relaxed and allowing you to break rules more easily without the need for struggle, often finds him dead in the first floor halls or in other places that he is preventing kids from going to.

Agnes
A dumpster hag found behind the playground. She may have something you need if you trade her food.