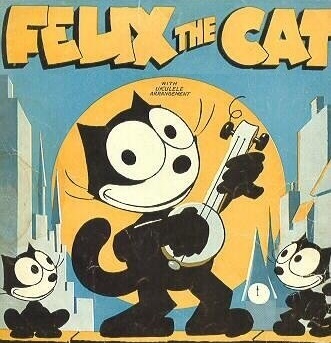 Unlike Joe Oriolo's softer take on the character, the original Felix the Cat cartoons were geared more towards an adult audience, and are unmistakably set in a surreal, comedic caricature of 1920's urban culture, with some fairy tale and fantasy elements sandwiched in. Felix is portrayed as a nomadic Anti-Hero who acts on his own in the bulk of these cartoons, with recurring side characters being kept minimal and only sporadically appearing. The newspaper comics and comic books are all derived from this era, but there is an overlapping period between them and the Oriolo Felix due to Joe Oriolo taking over the art and writing chores for them around 1954 and running them up to the early 60's.

In 1936, a few years after the original Pat Sullivan studio that produced the cartoons had folded, a very brief three short revival of the series was made by the Van Beuren cartoon studio and distributed by RKO as part of Van Beuren's Rainbow Parade cartoon series. Being helmed by ex-Disney director Burt Gillett, they have very little in common with the Otto Messmer cartoons, completely throwing out the comic like art style and surrealistic tone in favor of pure fairy tale style cartoons, with Felix himself being revamped into a more child like character. Three shorts were made for this revival, and evidence has surfaced that at least two more were planned, but the Van Beuren studio abruptly went belly-up in 1936 before anything beyond story and design work had been done.

While the cartoons were put on ice, the classic Felix series managed to find new life in the form of various newspaper comics and comic books, with the former running all the way up to the series transition into the Joe Oriolo era. The newspaper comics often carried a topper page centered on a parrot named Laura and her owners, and the comic books often had an anthology format that featured side stories of oneshot or bit-player characters alongside the main Felix stories. Otto Messmer drew the lion's share of the comic books up to his retirement around 1954, with Joe Oriolo and Jim Tyer sometimes moonlighting artwork in them. Oriolo himself took over art duties of the comic once Otto left, and would eventually end up running the iconic made-for-TV revival of the series.

Although the majority of these cartoons have become Public Domain material, the ancillary rights to all of the original cartoons, including the remaining original film elements, merchandising/licensing rights and the copyrights to the few cartoons that didn't lapse into the public domain, are owned by Universal Studios, the parent company of Felix the Cat owner DreamWorks Animation. Universal gained ownership of the cartoons and the character in August 2016 after acquiring DreamWorks, who had bought the character and related material in question from Don Oriolo in 2014. So far, there has never been an official home video release of the surviving cartoons, due to a combination of the deteriorating film elements and the slew of public domain releases in the market. It may take a while before Universal decides to do anything with the cartoons.

A recap page for these cartoons can be found here.