Western Animation / Felix Out of Luck 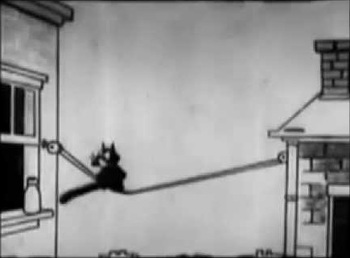 Felix attempting to get some lunch.
Advertisement:

Felix Out of Luck is a 1924 Felix the Cat cartoon, directed by Otto Messmer and produced by Pat Sullivan.

The cartoon begins with Felix happily hopping around. He comes across a mouse, who is afraid will eat him, but Felix says he already has a lunch waiting for him at home. Felix stops by a lunch shop, where a chef offers Felix a plate of bones, but Felix turns him down, saying once again that he has lunch waiting for him at home. But when Felix gets home, he finds a sign on the door of the house, saying his owner is out of town for a week. Felix goes back to the lunch shop, only to find a dog has already eaten all the bones left for him. Felix decides to eat the mouse nearby, but the mouse tricks him by leading him into a hose and turning it on full blast, squirting him into the air. Felix chases the mouse inside a house, but the mouse takes advantage of two holes in the floor by hiding in them, whacking Felix's tail with a hammer and yanking him by his tail into a hole in the floor, giving the mouse a chance to escape out the window.

With the mouse long gone, Felix decides to go look for lunch elsewhere. He goes to the city and looks through some garbage cans in an alleyway, and spots a milk bottle sitting up at a nearby window. Felix climbs up to a roof via a rain pipe and tightrope walks across a clothesline to reach the milk bottle in the window. Just barely out of reach, Felix thinks—and then realizes that he can use the question mark right above his head to his advantage. He hooks it onto his tail to make it longer, testing the milk for taste and then grabbing the bottle—only for the owner of the apartment to catch him and grab the bottle. Felix breaks free and has a laugh, but gets a teapot thrown at him, knocking him down to the ground.

Dejected again, Felix goes back to his house—only to find out his owner was home, with a hot meal ready for him the whole time. Felix, confused, asks about the sign, but the lady says it was only posted to fool the bill collectors. Felix, in shock, burrows himself into a grave in the ground, where a flower sprouts, much to his owners surprise.

The cartoon is Public Domain and can be seen here.