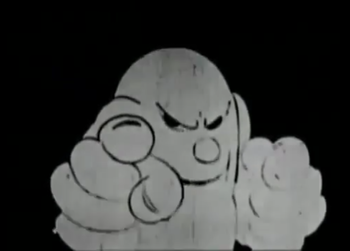 Felix the Ghost Breaker is a 1923 Felix the Cat cartoon produced by Pat Sullivan and directed by Otto Messmer.

The cartoon starts with Felix pacing around at night, stopping by a graveyard. He finds a tombstone and jokes that its an ideal resting place, lying down next to it for a nap. He's only able to rest for a few moments before he hears moaning from beneath the grave, waking him up. He briefly sees a pair of hands pop up from behind the tombstone, scaring him. Felix blows it off as a dream and goes back to sleep. He starts hearing the moaning again and the hand once again pops up, which Felix once again blows off as a dream—until a ghost finally pops up from behind the stone and looks around. It finally notices Felix and points threateningly at him—only to vanish. Felix laughs off the situation, only to turn around and come face to face with the ghost again! Felix tries throwing a rock at it, but the ghost teleports to the side and laughs at him, and then flies away. Felix deduces that the ghost is up to some kind of mischief, and decides to follow him. The ghost's first stop is inside a barnhouse, where he scares the animals and wakes up the farmer who owns it. Felix watches from nearby as a donkey runs out of the barn and the ghost continues tormenting with, with the animal unable to fight back against the appiration. The animal flees as the ghost flies back into the barn—and not moments later, a sow and her piglets come running out, with the mother carrying them all away in a wheelbarrow. The farmer, meanwhile, is watching the whole thing play out. The ghost decides to head into his house, and Felix tries to follow, only for him to bonk his head into the wall as the ghost phases through it. Felix climbs up to the window of the farmers bedroom, just in time to see the farmer in bed as the ghost appears to torment him. The farmer tries to shoot him with a gun, but he dodges once again. The farmer decides to grab his telephone and call for the cops. Felix watches on as a few dozen cops arrive and barge into the house, only for the ghost to quickly mop the floor with all of them, kicking them all out of the house back into their car and sending them fleeing, topping it off with the farmer being ejected from his home.

The farmer despairs at how his house is now haunted, but Felix offers to help him, claiming he's a regular ghost breaker. Felix heads inside to look for the ghost, tiptoeing around. In a corner, he notices the ghost has brought a few more ghosts into the house and begins to go after them—only for a dozen ghosts to pop up around him to scare him. Felix tries fighting them, only to notice they're gone. A hand pops out of the floor and grabs his tail, but Felix flees into another room. Thinking he's safe in another room, a ghost opens a hole in the wall and turns off the lights, and begins fighting Felix in the dark. Felix turns on the lights, but gets a glimpse of a skeleton. Once her knocks off the lampshade, it vanishes. Felix is getting fed up with being unable to fight the ghosts, and thinks about how he can trap them. He paces around for a moment, and then notices a bottle of rum sitting on a table nearby. Felix proclaims "They all fall for this!", just as a ghost pops up near him. Felix offers him the drink, and the ghost takes the bait—Felix runs out of the house with the rum, with the ghost in hot pursuit. The farmer watches from nearby as Felix pulls out a gun and orders the ghost to stick em up, and happily runs over as Felix has the spirit trapped. The farmer grabs his bedsheet and pulls it off, revealing the ghost is actually a door to door salesman. Angering that the man was using a hoax to try and sell him something, the farmer whistles for his donkey, who arrives and kicks the man right into the moon as the cartoon ends.

The cartoon is Public Domain and can be seen here.