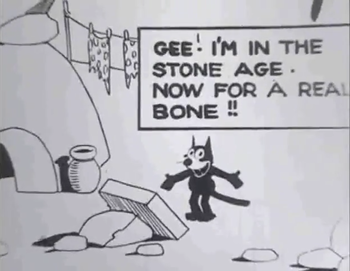 Felix in the Bone Age (sometimes retitled as Felix in the Stone Age) is a 1922 Felix the Cat cartoon, directed by Otto Messmer and produced by Pat Sullivan.

The film begins with Felix exploring a natural history museum, looking at sights like cavemen, dinosaurs and giant bones. He reads the sign for the Prehistoric Ham Bone, saying it dates back to the Stone Age, in the year 9000 B.C. Felix tries licking the bone, but gets caught by a museum janitor, and gets beaten up and thrown out. When he hits the ground, he gets knocked out cold, and enters a dream where he travels back in time, all the way to the Stone Age. Felix looks around and reads the local newspaper, presented as a carved slate of stone, and gets excited at where he's at, so he decides to go looking for a real bone.

Felix looks around and finds a caveman offering his girlfriend a new fur suit. She turns down the suit as old fashioned and cries. The caveman asks if she'd like a leopard skin, but she insits on a short model. the girl notices Felix nearby and points to him, and the caveman chases after Felix, cornering him on a cliff. Felix looks down below and sees a crowd of monkeys sitting at the bottom. Felix thinks and gets an idea, whistling for the monkeys help. The monkeys obey and form all of their tails together to make a pole for Felix to slide down on, which allows him to narrowly evade the caveman. Felix laughs at the caveman and blows a raspberry at him, and starts to play around, rolling a rock on his shoulders and bouncing it on his tail. He tosses the rock nearby, which unwittingly lands on the head of a nearby gorilla, angering him. The monkeys get scared and run off, and Felix pleads for the gorillas mercy, but to no avail as the ape gives chase. The gorilla chases Felix up and down a hill, and then throws a giant boulder at Felix, barely missing him. Felix hides behind a palm tree as the gorilla continues searching for him as the cartoon cuts off.