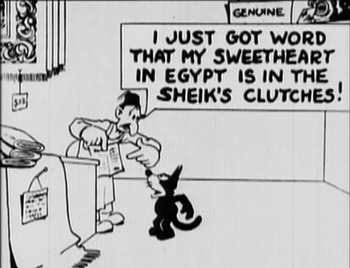 Felix Lends a Hand is a 1922 Felix the Cat cartoon, directed by Otto Messmer and produced by Pat Sullivan.

The film starts in the dead of winter, with Felix wading through the snow, shivering, coming across a billboard that says "Visit Egypt, land of sunshine and warmth!" Felix quips that he'd give four of his lives to be there, and moves on. Suddently, he hears some wailing from a nearby antique shop, and goes inside to investigate. Inside, he finds the shop owner bawling his eyes out, and Felix asks him whats wrong. The man tells him that his sweetheart, who is in Egypt, has been kidnapped by a sheik. Felix thinks of how he can help for a moment, and then eyes something nearby—a carpet with sign saying "Original magic carpet, Arabian Nights brand. Anyone repeating the magic word can fly all over the world..." Having a means of traveling there now, Felix promises to go to Egypt and rescue the mans girlfriend. Felix tries to figure out what the magic word is, starting with Alakazam and Gezundheit, but then settles on the word "Kosher" (written in hebrew in his speech bubble) which does the trick. Felix shakes hands with the shopkeeper and gets on the carpet, commanding it to take him to Egypt, and it promptly flies off. The carpet soon lands in Egypt, right near the pyramids, and Felix rolls it up as he begins his search for the girl. He notices a heiroglpyh tablet nearby, and picks it up to read it. The symbols are initially vague, but it morphs into the words "Am captive in sheik's tent across the nile. help. Fatima" Felix promptly begins his search for the Nile, but immediately comes across a crying camel. He asks whats the matter, and the camel tells him he hasn't had a drink of water in 30 days. Felix tries to help by pulling out a bottle of liquor, but he can only squeeze out one drop for the camel to drink, causing him to start wailing again. Felix runs off and finds a river nearby, and tries and fails to swim across it. Suddenly, Felix gets an idea—he goes over to the camel and leads him to the river nearby, which the camel drinks so much of, that its drained completely dry. Felix thanks the camel and heads across, finding the Sheiks tent.

Felix peeks inside the tent finds the Sheik smoking a Hookah, or at least trying too—until he finds out a mouse has gotten inside the pipe, which dances around to tease him. The Sheik, exasperated with the mouse, bellows "My kingdom for a cat!". Felix, peeking his head through the tent, immediately takes advantage of the situation and offers to help him. The sheik orders him to get rid of the desert rat. The sheik goes to sleep as Felix tries to catch the mouse, who is hiding in holes in the ground. Felix gives the mouse a piercing glare (with an eye line of daggers) and the two grab the daggers in mid air and begin to fight. Felix ends up chasing the mouse down into the hole and beating it, emerging victorious. Realizing the Sheik is asleep, Felix uses this opportunity to go into the other half of the tent, where he finds Fatima, bawling her eyes out. Felix tells her to calm down and that he's going to rescue her. Unfortunately, the Sheik wakes up just in time to hear this, and gets into a big brawl with Felix, chasing him out of the tent. Felix evades him and manages to get back into the tent, pushing Fatima out and taking her to the magic carpet. Felix says "Kosher" again and the carpet unwinds, but Felix has trouble getting the burly Fatima onto the floating rug, and gets squashed under her. Felix tries to pull her up onto the carpet, just when the Sheik spots them and begins a last ditch chase, with sword in hand. Felix finally gives up and drops Fatima onto the ground, creating a crater where she lands as he flies off. Felix arrives at the antique shop, and the shopkeeper asks where Fatina is. Felix, frustrated, sums up the whole situation with "What she needs is a ten ton truck!" The shopkeeper reacts with horror and faints as the cartoon irises out.