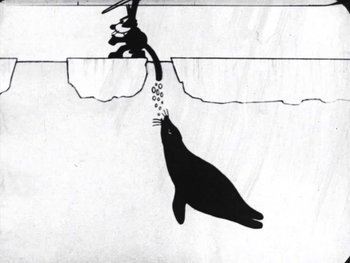 Felix Comes Back is a 1922 Felix the Cat cartoon, directed by Otto Messmer and produced by Pat Sullivan.

A meat market owner is seen sitting on a box, sleeping by his shop, with some weenies hanging on a hook nearby. Felix comes walking along, hungry as always. He sees the shop and tries to sneak up to it, only to see the chef nearby. Felix meows at the hot dogs, which howl back at him. The hot dogs chase after Felix into the distance as the chef awakens, angered at losing his meat. Felix lures the hot dogs into a log, blocking off one side with a rock, and whipping out a pistol to off each hot dog so he can eat them. He pulls out the limp hot dogs, lays them on the ground and begins to eat them. Meanwhile, the chef, still angry, twirls his mustache and vows "I'll fix that cat the next time he comes here!" Felix finishes eating his hot dogs, and decides to go and hunt a few more, running back to the meat market. Inside the shop, the chef has set a trap for Felix, putting a hot dog on a plank suspended on a brick, which, when Felix steps on, will make him fall into a trap box below. The chef hides behind the counter as Felix approaches around the corner. Felix looks around and eyes the hot dog, and ends up falling for the trap. The chef happily grabs the box and drags it all the way to the nearby docks, yelling "I'll put you where you'll never come back!" and throws Felix into the ocean. Felix, now at the bottom of the dock, calls for help as he finally breaks free of the box. Felix is curious about is new surroundings and begins to look around, only for a giant fish to come out of nowhere and eat him alive.

The film cuts to Friday in Iceland, where an Eskimo is seen fishing out of a hole in the ice. He catches and pulls out a big fish, which turns out to be the one that ate Felix, with the cat emerging from the fishs mouth, much to the surprise of the Eskimo, who is shocked enough to fall into his own fishing hole. Felix realizes he's in the Antarctic as his thinking question mark freezes and dissolves into snow on top of him. Felix runs off to find a place warm, but instead finds another fishing hole, where he sees a fish hopping out of. Grateful that he at least won't starve there, he hides behind a rock to try and catch the fish. Just then, a penguin walks nearby and sees Felix's tale poking out from behind the rock, which it grabs and eats. Felix replaces his tail by thinking up a question mark and bending it in shape, and chases after the penguin, who hides in a snow pile. Felix jumps in and tries to fight him, but ends up finding an angry seal inside, which chases Felix into another fishing hole. Felix tries to attack the seal with an icecyle, but the seal drags him underwater by his tail and fights him. Felix tries to evade the seal by climbing up a slope and grabbing an icecycle, but it turns out to be the tail of a polar bear, who starts chasing him. Felix climbs on top of an icy pole and proclaims that he's safe at last, but the bear breaks the pole and continues the chase. Felix tries to think of a way to get away from the bear, and thinks up two question marks over his head, which he turns into two ice skates, which he slides away on. The bear continues chasing Felix, finally cornering him on an iceberg, which the bear pushes to send Felix floating out into the ocean, telling Felix to stay out and freeze as he laughs at the cats expense. The iceberg is set adrift in the arctic and heads south, and Felix gets frozen solid while sitting on it.

Meanwhile, the meat market is serene, with the owner happily smoking his pipe, happily proclaiming "It seems like heaven since I got rid of that thieving cat!!" Not a moment later, an Iceman comes to the door and drops off a giant cube of ice, which instantly melts, revealing Felix, who realizes he's back in the meat shop. Felix decides to get even with the chef, and meows again, getting every sausage link in the shop to chase after him. The chef realizes whats going on, gets exasperated and throws in the towel as the film irises out.

The film is Public Domain and can be seen here.