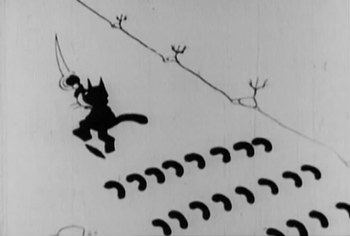 Felix leading his army of hot dogs to victory!

Felix Turns the Tide is a 1922 Felix the Cat cartoon, directed and animated by Otto Messmer and produced by Pat Sullivan.

The films begins as the owner of a Meat Market is reading the newspaper outside of his shop, and gets worried when he sees the headlines. He calls for Felix, who is working for him inside the shop, and Felix grabs the paper to read the headlines: EXTRA! WAR DECLARED!!! RATS START WAR ON CATS! Noticing that cats are already mobilizing for the war effort, Felix shakes his head at the outcome and voluntarily drafts himself, hanging over his apron to the Meat Market owner as a sign of resignation. The owner salutes him and shakes hands as he tells Felix “Any time you need help, call on me!” Before he can walk off, both Felix and his former boss look sadly at each other before the cat runs off, with the owner waving goodbye to him. Felix runs to the house of his girlfriend, Kitty Kat, telling her the news and pointing out that loads of cats are pouring into a recruitment office (a tent), coming out armed with rifles and bayonets. Initially shocked at the news, Kitty becomes happy at the idea of Felix becoming a hero by joining the army. Before he leaves, Felix gets on bent knee and asks Kitty “Will you marry me when I come back?” She responds with a nod and a kiss as Felix walks outside, marching inside the tent and coming out armed and marching not a moment later, testing his bayonet and swinging his rifle in the air.

The film immediately cuts to the front lines of war, where whole platoons of cats are seen being blown to kingdom come by artillery fire, with the skies lit ablaze by explosions. The general cat, standing near his tent, watches through a telescope as a mouse in a hot air balloon fires a cannon towards the battlefield. The general shakes his fists in anger and yells “Curses!” and calls for Felix, who immediately rolls out of the nearby tent and salutes him. The General gives Felix his telescope, and Felix also notices the airborne mouse, and then catches sight of a cannonball flying right into a trench, blowing the bodies of eight cats out of it. Felix says “Don't worry, general, I'll fix him!” The mouse gives an arrogant “Ha! Ha!” as Felix runs towards a cannon. Thinking for a moment, Felix decides to stuff himself inside the cannon, with the cannon arming itself with a cannonball right behind him. With a blast, Felix is launched directly into the balloon and fights the mouse in it. Felix comes out on top, and throws the lifeless body of the mouse out of the balloon, right in front of a platoon of mice below. Noticing that the balloon is anchored to the ground by rope, the head mouse orders his men to follow him up to the balloon basket. Felix notices this, but makes an escape by grabbing a bayonet and cutting the rope, freeing himself and sending the mice falling to the ground below. Felix anchors the balloon to a nearby cloud, and parachutes himself down to the general cat's tent. Felix arrives to give the good news, but the general points him in another direction. Felix looks on in horror as he sees mountains and mountains of dead cats laying around, victims of the brutality of war.

The general tells Felix that unless they get reinforcements, the battle is lost. Thinking for a moment, Felix remembers the meat market owner telling him to call him if he needs help. Felix tells the general “Leave it to me gen'. We'll win this war yet!!”, salutes, and runs off to a nearby radio, where he sends an S.O.S. Signal to the meat market owner. The owner responds and Felix breaks the bad news to him; “Army shot to pieces! Send help at once!! Felix.” The owner thinks of a way to help him—with a whistle, he summons a sink of nearby hot dogs, who leap into the radio phone and travel along the wire. Next, the owner's fridge door opens, and dozens and dozens of hot dog links come pouring out into the radio. The hot dogs land in front of Felix, now brandishing a sword, and calls them to attention, ordering them to charge! Felix runs forward with an entire army of hundreds of hot dogs, who run directly into the fortress of the mice, and mop the floor with them. The cats reign victorious, and the general salutes Felix, pinning a medal on his chest. Felix returns to his town as a hero, taking part in a parade. The meat market owner sees him, and salutes and claps for him, motioning for him to come on over. Felix shakes hands with him and shows him his new medal. The man shakes hands with Felix, and then hugs and smooches Felix on the cheek. Felix then announces his plans to marry Kitty—only for the meat market owner to laugh, much to Felix's confusion. He then breaks the bad news to Felix—Kitty married his rival while he was gone! Felix looks on as Kitty is angrily nagging her husband, who have a litter of 16 kittens to care for. Rather than getting angry at the outcome, Felix hops on the chef's chest as he laughs, saying “Gosh I had a narrow escape!”