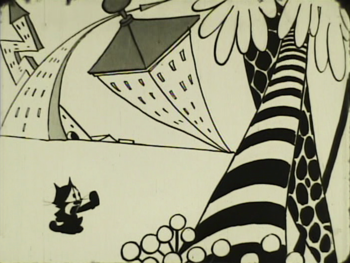 Felix Dines and Pines is a 1927 Felix the Cat cartoon, directed by Otto Messmer and produced by Pat Sullivan.

Felix is found standing near a drainpipe and barrel, hungry as usual. He pulls out a menu for whats to eat for today, with a big question mark sprouting on it. He walks near a window of a house and notices a man sipping some Fruit Punch out of a bowl. Felix whips out his menu and writes down Punch as an appetizer on it. Felix then walks off to a diner, where a chef is cooking some spaghetti. He steals the spaghetti from the chef and runs off with it. Arriving back at the house, Felix launches the spaghetti up into the bowl and uses it as a straw to drink all of the fruit punch, much to the anger of the house owner. Full, Felix walks away and stops by another house, where he hears some music playing. He sees a man eating some soup, humming a tune while getting his beard soaked in it. Felix greedily eyes the meal and whips out the menu again, writing down Soup. He goes inside, pulls off the mans beard, and squeezes the soup into his mouth out of the beard. Felix walks off again, stopping by a shed as he wonders what he'll eat next. A mouse comes along, so Felix writes down mouse on his menu and gives chase. The mouse lures Felix inside of a hose and turns it on full blast, spraying Felix away. The mouse proceeds to beat up Felix, and grabs him by his tail and hurls him down, and then knocks his head off with a punch. The mouse then grabs Felix's menu, angrily crosses off Mouse for Felix, and walks off.

Annoyed, Felix walks off, and comes across the shop of a man named Mexican Pete, who has a stock of jumping beans. The beans bounce inside in a sack to get sold, and Felix notices the bag outside, not knowing the beans are jumping beans. Still hungry, Felix writes beans on his menu, and eats a whole bunch of the jumping beans, only to start bouncing around helplessly due to them. The bouncing stops, but Felix, still hungry, wonders what to eat next. By chance, a chicken walks nearby, and it watches Felix write it down as his next meal on his menu. The chicken gets scared and runs off, with Felix in pursuit. Felix dons a chef hat and apron, and pulls out a knife and fork to try and do in the chicken and eat it. The bird calls for help, and a batch of nearby eggs arrive, hatching into five chicklets who beat up Felix and toss him away near a garbage pile.

Felix gives up and tears up the menu, and notices an old boot nearby—desperate, he eats it whole, along with a tin can. Felix starts feeling stomach pains from what he ate, but he decides to go to sleep anyway. Immediately, he enters a nightmare where the world around him abruptly morphs into a monster. Felix, now lost in a surreal landscape, continues feeling stomach pains, but he finds hope when he sees Santa Claus nearby. Santa motions for him to come over, and Felix does—only for Santa to morph into another monster right in front of him! Felix runs through a spiral tunnel, which ends in a white void. Confused at where he is now, Felix looks around. Suddenly, a giant chicken appears behind him, and Felix runs away from it as it tries to eat him, while it morphs into the old man, the mouse, Mexican Pete, and the boot he ate, all giant now. Then the landscape turns into an ocean where a giant fish is after Felix, who is now swimming for his life. Eventually finding safe ground, Felix finds a chef who offers him a hot dog—but the chef vanishes and the hot dog turns into a bear, who starts fighting Felix, and then morphs into a giant snake that tries to eat Felix alive. Felix grabs its tongue, which turns it into an umbrella—only for it to morph into a bird and carry him up, dropping him way up high from the sky. Felix hits the ground and splits into numerous mini versions of himself, quickly reforming. The city around him morphs into a stormy sea around Felix, and a chef shows up to stab Felix with a fork—only for Felix to finally wake up from his nightmare. Felix pours a drink for himself to settle his stomach as the film irises out.