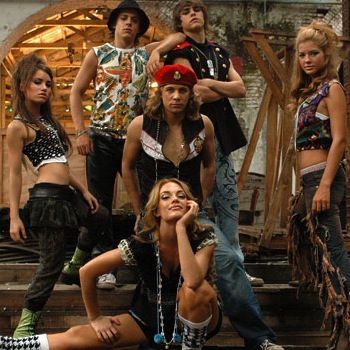 The main cast minus Bauer. And Malvina.
Advertisement:

Casi Ángeles (lit. meaning Almost Angels) is an Argentine live-action TV series about a group of orphans who are exploited and forced into robbery by the orphanage director, Bartolomé Bedoya Agüero. However, Bartolomé is running low on cash and in order to receive his dead aunt's inheritance there are two conditions he must meet: keep the orphanage running and make his younger sister Malvina get married. The woman's current boyfriend, Nicolas Bauer, arrives to the Bedoya Aguero mansion after getting engaged to her, accompanied by his son Cristóbal and a savage named Mogli.

Around the same time, a young circus performer named Cielo Mágico catches one of the girls from the orphanage, Alelí, stealing at her circus. She's able to save her from the man she robbed and gets her back to the orphanage, but on their way they find other kids from the orphanage putting up a show to steal. Alelí takes advantage of the occasion to pick a man's pocket, but Cielo catches her and takes the wallet she stole from her. However, the man (who happens to be Bauer) finds them and accuses Cielo of being a theif. Cielo then runs away... with the wallet. She later returns it to Bauer, who realizes she isn't a bad person after all, and gets her a job as maid in the Bedoya Agüero mansion... much to the dismay of Malvina, who (unlike the other two) notices a Love Triangle blooming.

The series had a total of four seasons.