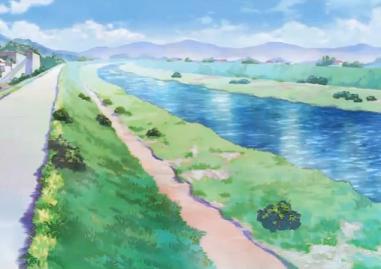 Many Japanese cities, as seen in Anime and Manga, will feature a river with a gently sloped artificial riverbank featuring a sidewalk or trail either at the top or bottom (or both) and stairs to descend to the water's edge. There's likely a nearby bridge, too. Suitable for Lying on a Hillside, Scenery Porn, Watching the Sunset, and That Cloud Looks Like.... This is Truth in Television, as the Liberal-Democratic Party - which has virtually monopolized the government for several decades note  Except for a couple brief stints of minority status in 1993 and from 2009 to 2012, more about that on Japanese Political System - realized back in the '60s that investing huge sums in semi-useful infrastructure and beautification projects kept people employed, happy, and voting for them. Thus, many if not most rivers that pass through urban areas have received this treatment. However, only the largest tend to be picturesque, with most being small creeks enveloped by steep concrete. These also happen to serve a practical purpose in allowing for controlled overflow during the typhoon season.