Literature / The Villains Series
aka: Vicious 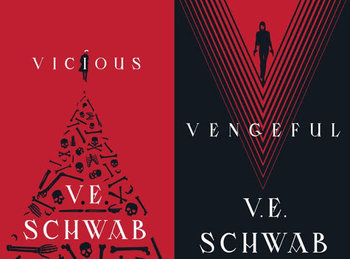 Red and Black and Evil All Over
But these words people threw around—humans, monsters, heroes, villains—to Victor it was all just a matter of semantics. Someone could call themselves a hero and still walk around killing dozens. Someone else could be labeled a villain for trying to stop them. Plenty of humans were monstrous, and plenty of monsters knew how to play at being human.
— Victor Vale
Advertisement:

Vicious begins the story of Victor Vale and Eliot "Eli" Cardale, two academic rivals and best friends, who are working on their senior theses when a shared research interest leads them to a working theory about the adrenaline response of near-death experiences as a possible origin of super-powered individuals note (called EOs in this setting, short for ExtraOrdinary). In a fit of drunken impulsiveness, they decide to test the theory on themselves, with predictably tragic results. Ten years later, Victor escapes prison with his cellmate, a talented hacker named Mitch Turner, and embarks on a revenge-fueled quest to hunt down his former friend, now known as Eli Ever. On the outskirts of a city called Merit, their path crosses with Sydney Clarke, an almost-thirteen-year-old with a bullet wound in her arm, a personal interest in seeing Eli Ever pay for his crimes, and the ability to raise the dead, sending them all speeding down a path towards an explosive showdown.

Vengeful picks up five years later, with the surviving characters dealing with the aftermath of the first book and the choices they all made that fateful night. Meanwhile, things are once again shaking up in Merit, with the sudden rise of a powerful and ambitious new EO named Marcella Morgan. The wife of a recently deceased mob boss, Marcella has been biding her time at her husband's side and formulating her own ideas about how the city should be run... ideas that put her on the radar of a shadowy new organization known as EON.

Schwab has announced plans for a third entry in the series — tentatively titled Victorious — with an unknown release date.

A Comic Book series set in the five years between Vicious and Vengeful called ExtraOrdinary was published by Titan Comics in 2021.

There are no Good Tropes in this game:

open/close all folders
A-L
M-Z
"To never dying."
"To being remembered."
"Forever."