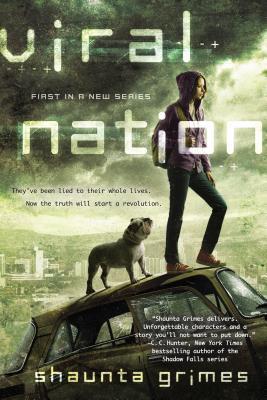 Viral Nation is a series of dystopian novels by Shaunta Grimes.
Advertisement:

Clover Donovan, an autistic sixteen-year-old living with her older brother West after a viral pandemic wiped out most of humanity, has been accepted by the prestigious Waverly-Stead academy, where she has dreamed of studying her whole life. But she can't go unless she parts with her service dog Mango, which she refuses to do. Instead, she is recruited by the Time Mariners, who travel into the future to gather information. Then she learns that West's life is in danger. In order to save him, she'll have to go against the Company, which controls almost every aspect of life.