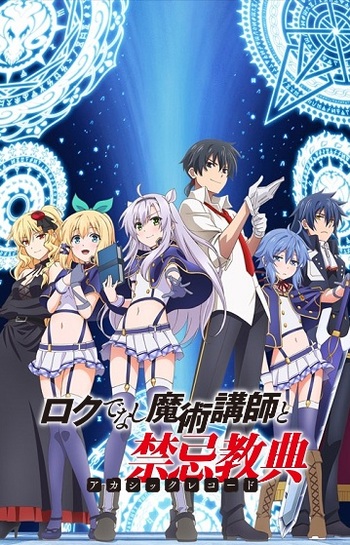 Once Upon a Time, there was a boy called Glenn Radars, who just wanted to be a hero like the mages he grew up reading in his storybooks. In the present, he is anything but. Glenn is a tardy, lazy, and seemingly incompetent bastard; and against all odds, he is forced to become an instructor at the prestigious Alzano Imperial Magic Academy. As you can expect, he doesn't even try to make a good impression with his class, especially the studious and proud Sistine Fibel, who challenges him to a magic duel with the condition that he will take his job more seriously if she wins. The fight, if it can even be called a fight, goes in Sistine's favor and, for once, Glenn is forced to make himself useful. Still, there might be more to him that meets the eye.

The series also has a spin-off named Memory Records of Bastard Magic Instructor (ロクでなし魔術講師と追想日誌メモリーレコード, Roku de Nashi Majutsu Kōshi to Memorī Rekōdo) which is a Compilation Rerelease of four side stories which were originally released in Dragon Magazine with only the last side story being made for that volume. It's currently ongoing since there are also many other side stories that are released inside magazines, but aren't compiled into volumes yet.

A manga adaptation illustrated by Aosa Tsunemi was serialized in Monthly Shonen Ace magazine from March 26, 2015 to June 25, 2021. It has been licensed by Seven Seas Entertainment for an English release.

Liden Films released an Animated Adaptation in April 2017, which ran for 12 episodes. It can be legally viewed subbed on Crunchyroll here