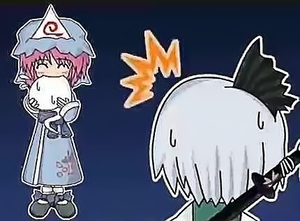 This was originally intended to be a trope page for a single story, but as time passed new stories were written and, completely unexpectedly, tropes were used in them too. So this page now serves as a folder for tropes used in Touhou fanfiction written by Vrock8. The page picture is for the “Snack Tour”.

is a pretty faithful Darker and Edgier adaptation of the ghost team scenario of Imperishable Night.

It focuses mostly on misadventures of Youmu and Yuyuko, as they blast through the stages, engage in philosophical conversations with bosses and explore the forbidden love that blooms between them.

is a story about Reimu coming down with a mysterious disease that causes her to cough up blood. Marisa does her best to save her, contacting Eirin and other powerful beings of Gensokyo.

is a story about an Original Character, Luxia Tenebria, the youkai of light and shadows born in Gensokyo. She is cute, and she is evil, and she hears a mysterious voice in her head telling her to do good deeds. So far, the most hateful of my stories.

'' is a story that recounts the events of the apocalyptic scenario, the events that were brought in motion by Pazuzu himself.

Tropes used in Shards of Obsession: