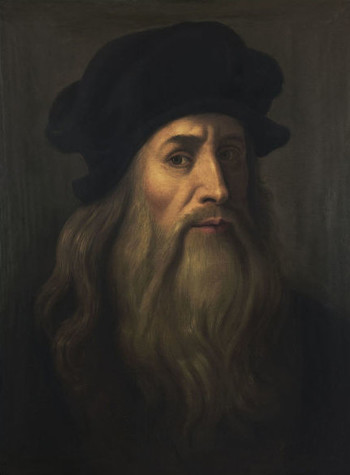 Digital restoration of the Lucan portrait

of Leonardo discovered in 2008.
"Where the spirit does not work with the hand, there is no art."
Advertisement:

Born in Vinci, Italy (hence "da Vinci", i.e. from Vinci), Leonardo apprenticed at the art workshop of Andrea del Verrocchio in Florence at age 14. According to legend, when Leonardo and Verrocchio collaborated on a painting, Verrocchio found himself so outclassed by his apprentice that he abandoned art altogether. It's almost certainly not true - the story comes from Vasari's 1550 Lives of the Artistsnote That's the commonly-used short title, at least. The full title is Lives of the Most Excellent Painters, Sculptors and Architects, the first work of art history and full of gossip, legends and apocryphal anecdotes - but it does reflect just how famous he was. Barely thirty years after his death, he was already the stuff of legend.

Leonardo spent time in Florence, Milan and Rome, working for various wealthy patrons. He produced some of the most famous paintings history: The Last Supper, Virgin of the Rocks, and, most famous of all, Mona "what-is-she-smiling-at" Lisa, considered to be either the most beautiful or the most kitschy work of art in history and the most famous, period.

Besides above-ground art, Leonardo also trafficked in the shady world of anatomy, secretly procuring corpses and dissecting them (an act which could get you killed at the time) to study the human body.

Leonardo always considered himself foremost a scientist. The areas of his interest include: aeronautics, anatomy, astronomy, botany, civil engineering, chemistry, geology, geometry, hydrodynamics, mathematics, mechanical engineering, optics, physics, pyrotechnics and zoology (allowing him to put pretty much every Omnidisciplinary Scientist in fiction to shame). His inventions range from the mundane (strut bridges, automated thread-winder, pulley systems) to the height of—for the times—science fiction, including tanks, airplanes, helicopters, and a mechanism for walking on water. Leonardo's awesomeness is such that he even gets his own genre of science fiction—Clock Punk.

In fact, it is his interest and expertise in so many areas which inspired the term "Renaissance Man". Unfortunately, though, he was interested in so many things that he couldn't settle down to work on anything. Many of his artworks and engineering projects never got off the drawing board, or, in the artwork's case, the doodlepad.

Leo was probably what we would call homosexual today (as such a word didn’t exist until the 1860s) but due to the passage of time, it’s difficult to say such definitively. When he was 23, he was arrested on a sodomy charge after reportedly hiring a male prostitute. He never wrote much about his personal life but in one of his journals wrote about how disgusting he found procreation. That may be due to him being gay but can also be interpreted as him being (again to use a modern term) asexual. Some believe that after he was arrested for sodomy, he became celibate while others argue that he was actively having relations with men (including a long term relationship with one of his students)but just got better about hiding it after the arrest. Some biographers like Walter Isaacson will outright say he was gay.

Leo died in 1519. He was famous across Europe, as famous as any king, priest or soldier, and celebrated for his art, his intelligence and his good looks. He was subject to gossip and myth in his own lifetime. You can well imagine how things get out of hand after his death. He's part of the trinity of Julius Beethoven da Vinci and his life often serves as Biography à Clef. He probably was not an immortal alien... or friends with a Time Lord... or a sacred feminine worshiping cryptologist... or an ally of an order of assassins. And he was definitely not a ninja turtle. Or an ancestor of Stewie Griffin. He also did not return in a female body that looked like the Mona Lisa to help with saving the world. And we're decently sure he never traveled to South America in search of a magical book of knowledge.

Also note, again, that "da Vinci" indicates where he was from. Surnames in their modern form did not exist in Italy at the time and people called him Leonardo, not "da Vinci". Da Vinci simply means "of Vinci", so it would be somewhat like saying "What would Of Nazareth do?" This is still the case among historians and people who know what they're talking about - any proper book will call him Leonardo not just out of familiarity, but because it was his only name. (So yes, the book should be called The Leonardo Code, but we didn't name a trope after Dan Brown for nothing.)

Works by Leonardo on TV Tropes

Tropes in his other works