A Wild Hunt in the Dead of Night.

In the first game, UNDEAD is lauded as the most rebellious and wicked idol unit of Yumenosaki Academy! The members of the unit—self-proclaimed devils of the night—are dark and wild.

In the second game, UNDEAD is a wild unit affiliated with Rhythm Link. Led by Rei Sakuma, when it comes to fan-service each member delights with their individual style. Their ability to be highly flexible gives them plenty of publicity as the MCs of variety shows, radio personalities, in commercials, and even as fashion models. Work that utilizes their character and visual style is their main focus.

Their theme color is purple. 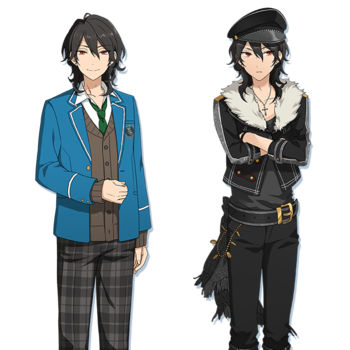 A self-proclaimed "Vampire" who becomes completely miserable when the sun shines on him, even in the early morning, Rei is one of the "Three Oddballs." While he appears sociable, he never shares his true intentions with anyone. He speaks and acts like an elder, and he also knows a lot about the school's history. Since he studied abroad for a year, he has to repeat a grade.

Even though Rei is the president of the Light Music Club, he makes no effort to put things together. He loves his brother, second year Ritsu Sakuma, but receives harsh treatment in return. He is the leader of the unit UNDEAD. 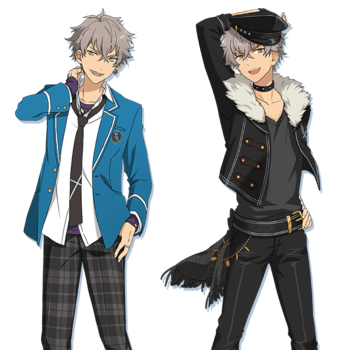 EnStars!!: Sharpened Claws, Bared Fangs! It's Wolf Rock!
"Huuh? Want me to bite you to death?"

Wild with a hearty personality, Koga has great self-confidence and always thinks of himself as the best. A self proclaimed "wolf," he snaps at everyone no matter who they are. Since he has a keen nose, he dislikes things that have a strong smell.

He has a corgi named Leon, who is good friends with second year Subaru Akehoshi's pet dog, Daikichi. He is somewhat hostile toward third year Rei Sakuma and calls him "vampire bastard," but as it turns out, Rei is good at making Koga do his bidding. A member of the unit UNDEAD. 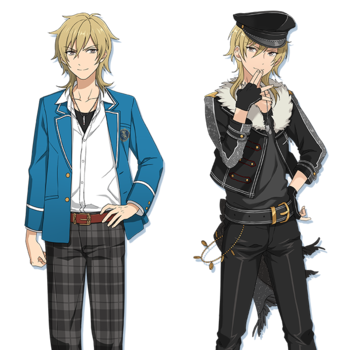 EnStars!: A Messenger Of Love Who Wanders As He Pleases
EnStars!!: A Wind That Carries Love Wherever It Pleases
"I'm a genius at entertaining others. No joke ♪"

Kaoru is a ladies' man with an easygoing and gentle personality and way of speaking, he loves girls and can't resist seducing any girl he sees. He never experiences the restrictions of a strict family, making him a free spirit.

He has little interest in clubs and unit activities, and prefers instead to spend time hanging out with girls in town. He's very popular despite his frivolous personality, showing an outstanding ability to attract the audience whenever he's in the mood to stand on stage. His hobby is surfing. A member of the unit UNDEAD. 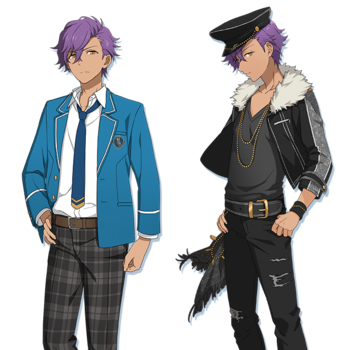 EnStars!: He Who Protects the Small 'til the Very End
EnStars!!: Bringing LOVE&PEACE to People 'Round the World
"Transfer student. Eat meat."

A quiet young man of mixed blood, Adonis comes from another country, but his Japanese is by no means bad. His father is a foreigner, while his mother is Japanese. Due to his reticence, he gives off the impression that he's grumpy and scary, even though he doesn't mean to.

He loves small and cute animals. However, he's scared of touching them, so he only watches them from a distance. He's worried about the frail (or so he thinks) heroine and often recommends meat or nutritious food. A member of the unit UNDEAD.

Prior to the series, the unit was originally named DEADMANZ and was composed of a different lineup, consisting of Rei, Koga, and Keito.
Keito Hasumi 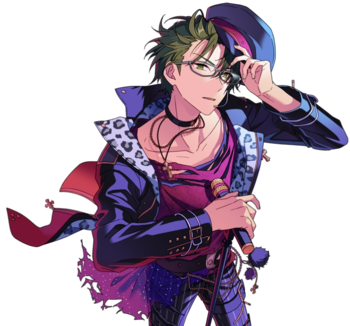 A former member of DEADMANZ. Keito left to assist the student council by forming the unit AKATSUKI. When Rei revives DEADMANZ, Keito participates as a member. 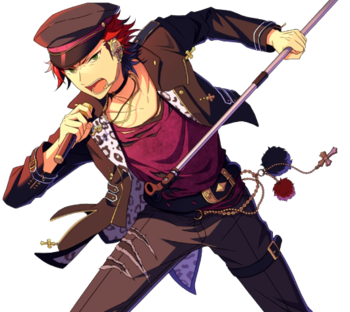 A temporary member of DEADMANZ, who later joined Keito's unit, AKATSUKI. When Rei revives DEADMANZ, Kuro participates as a member.