"It is unnecessary to heed the gazes of the vulgar folk, you know!"
Voiced by: Hiroki Takahashi (Japanese), Shawn Gann (English)
Portrayed by: Taiki Yamazaki (stage play)

The leader of the Unit "Valkyrie" that Nazuna was a member of until his third year. One of the original five oddballs. He and Mika have continued with their activities since Nazuna left, albeit less frequently. As the captain of the handicraft club, he has dexterous and skillful fingers, and made the uniforms of their unit by himself.

He is an arrogant person who wants everything to go his way. Despite this, he does not like places with many people and is not very good at facing the crowds at lives. 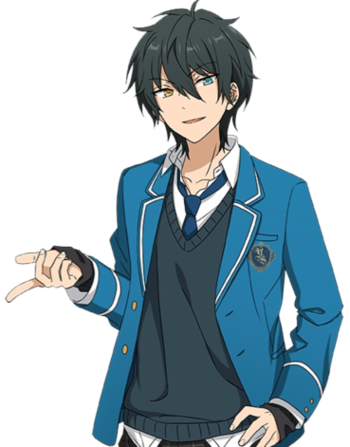 "Jus’ don’t stare too much at me, alright? I.. don’t like bein’ looked at too much, yanno~?"
Voiced by: Jun Oosuka (Japanese), Clifford Chapin (English)
Portrayed by: Hiroki Ino (stage play)

Being all alone as a first-year, he admires Shu because he called out to him. He is currently getting along with him in the handicraft club. He harbors complicated feelings towards Nazuna, who left their unit. He has an honest and gullible personality, but can easily become lonely and broody.

He likes cute and scary things, but has very few friends because he has difficulties finding people who share his interests. He has a complex about his girlish name and mismatched eyes. 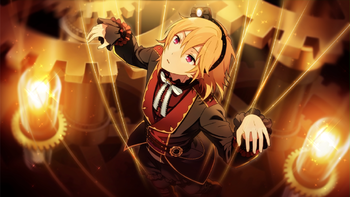