The Southern Cross Sparkling in the Night Sky!

In the first game, they are the academy's nova—a new star that aims to become the brightest shining star! With an incredible bond between the members, Trickstar is a group of the most promising stars that will be sure to stir up the whole academy with their ceaseless energy! Being the protagonist group, these four idols are the unit the player character first produces for and manages.

In the second game, Trickstar is a fairly orthodox idol unit affiliated with Star Maker Productions. Led by Hokuto Hidaka, their fanservice is both dazzling and comfortably personal with their audience. Trickstar overflows with a calming energy and genuine character, so their work in media focuses on appearing in variety shows, hosting official events, acting as radio personalities, and being the face of advertising campaigns in commercials.

Their theme color is orange. 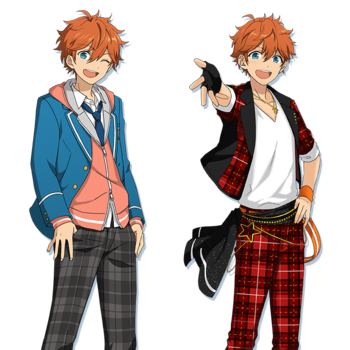 A hardworking mood-maker who thinks of everything in a positive light, Subaru's always on the go, never settling down. He likes money (not in a materialistic way; he just likes shiny things and loves coins regardless of the value).

He's often with his classmates Hokuto Hidaka and Makoto Yuuki. Together with class B's Mao Isara, the four of them form the unit Trickstar, and they all get along well. Subaru owns a shiba named Daikichi. 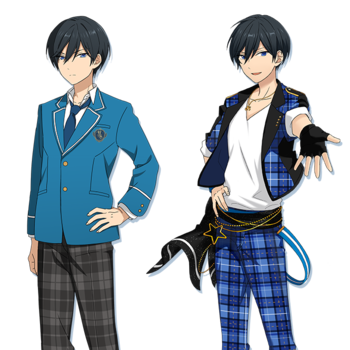 EnStars!: Passion Hidden in Cool Eyes
EnStars!!: The Prince with a Zealous Glance
"Seriously, why are the guys in our class such a handful?"

Calm, cool, and collected, Hokuto is a hard-working perfectionist. He hates when his pace is disturbed. Though he might come across as cold to his noisy classmates at first, he values his friends. He's kind and will explain things thoroughly to those who don't understand, but he's also slightly air-headed.

He likes simple sweets, and his overall tastes are somewhat old-fashioned. The eccentric theater club president Wataru Hibiki gives Hokuto a hard time with his crazy antics, but Hokuto is striving to organize proper club activities. The leader of the unit Trickstar. 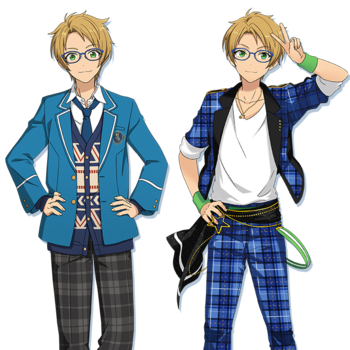 EnStars!!: The View Through the Lens is My World♪
"Have courage, myself! After all, my name is Yuuki! Ah, nice pun."

Although he acts the part of an energetic mood-maker, Makoto is easily overcome by nervousness, and to top it off, fumbles sometimes when trying to communicate his feelings. He's also terrible at talking to girls while alone around them. So that he can overcome all his real and perceived flaws and not let his unit down, he works very hard at becoming the idol he desires to be.

The broadcasting committee relies on him for his excellent ability to gather information. While it was never his intention to become a model, he's been in show business since childhood because of his parents. He's a real looker when he takes off his glasses. A member of the unit Trickstar. 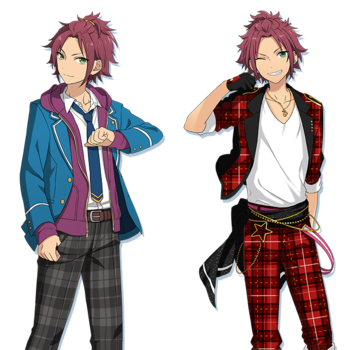 EnStars!!: Face to Face with Everyone!
"I just don't want to get pulled into unnecessary troubles!"

Mao is a reliable boy who loves taking care of others and never fails to lend a helping hand, even when he complains about it. Even though he is the student council's treasurer, he's also a member of the unit Trickstar, and the two groups often go head-to-head against each other. He doesn't like getting into trouble, but always finds himself dragged into it.

Being a student council member, he does everything flawlessly. He doesn't like being the center of attention, so he often provides support from behind the scenes. Childhood friends with his neighbor Ritsu Sakuma.