"It’s best you be on your Guard. The better you hear, the easier it is to be caught by Magic."
Voiced by: Kenji Nojima (Japanese), Derick Snow (English)

Sharp-tongued and perverse, he has fun taunting his opponents and companions alike with his eccentric behavior. As one of the former "five oddballs", he looks up to and idolizes his "oddball" seniors, especially Wataru Hibiki.

He is the leader of the unit Switch.

"I feel uneasy! It's scary when there's something I don't understand!"
Voiced by: Kaito Ishikawa (Japanese), Justin Briner (English)

Although he can be high-strung at times, he is usually gentle in his demeanor. He is interested in fortune telling and divination, and keeps a lucky item of the day as part of his daily routine. He serves as the library chairman and often receives harsh treatment by Natsume. A member of the unit Switch. 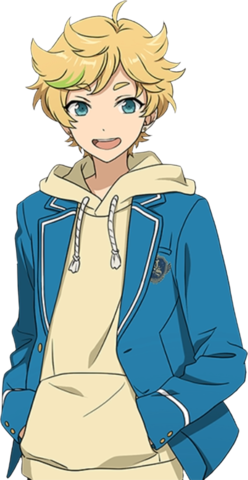 A cheerful and "my pace" kind of character. Because he acts on intuition, his communication skills are a bit on the weak side. He has synesthesia, which gives him the ability to sense the color of sounds and odours. He idolizes Natsume and Tsumugi. A member of the unit Switch.