An Order of Knights Devoting Songs to You.

In the first game, Knights is a unit made up of graceful and charming knight-type members, led by Leo Tsukinaga! Each member possesses a high level of technique, captivating the audience by showing them exactly what they want to see.

In the second game, knights is a chivalrous unit affiliated with New Dimension, Led by Tsukasa Suou, they make full use of their knightly personae and engage in plenty of fanservice. When doing work in media, their jobs include commercials, fashion modelling, variety programs, gourmet reports, dramas, and other jobs that make use of their appearance.

Their theme color is navy blue. 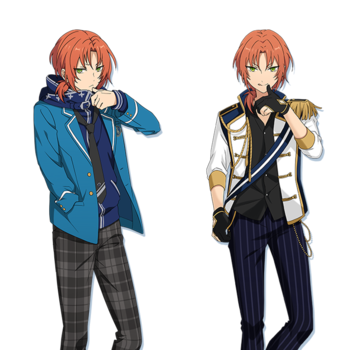 Has not attended school since his 2nd year spring break. Adores his little sister and wild dreams (inspiration), he flits about as an elusive figure constantly gaining inspiration from a variety of things. The songs he creates are recognized by both himself and others as music of a genius.

Due to acting like a knight in front of his little sister, she is not aware of his true nature. He is the leader of the unit “Knights”.

Kuro remarks that he has no idea how Leo is not considered an oddball, despite being in the same class as the others (except Natsume), and acting on his own volition. 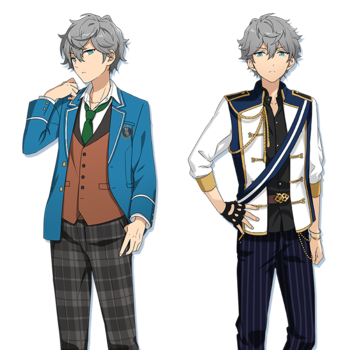 EnStars!: The Cynical Prince of the Modeling World
EnStars!!: Wishing Knight Who Chases Dreams
"All right, you're in my way~ You're in my way as well~"

Foul-mouthed and not honest with himself, Izumi has a big attitude, is full of confidence, and assumes a detached attitude towards the world at large. He hurls spiteful remarks towards anyone he meets, like a violent-tempered cat.

Izumi used to be a popular model, but went on hiatus and entered the school in order to start over as an idol. He is actually fond of second year's Makoto Yuuki, who worked as a model just like him, despite Makoto hating his affection. A member of the unit knights. 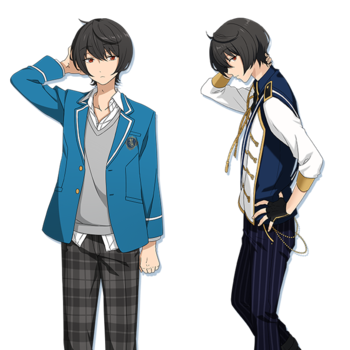 EnStars!: The Sleepy Black Prince
EnStars!!: Vampire Knight Who Watches Over the Night
"You disturbed my sleep. Just when I was having such a nice nap, too."

Ritsu always sounds sleepy and languid. Nocturnal and loves sleeping, he can be found napping anywhere. He had to repeat a year due to too much tardiness and dozing off in class, but he doesn't care.

Childhood friends with second year Mao Isara; they know each other very well. Even though he's older, Mao is actually the one taking care of him. Third year Rei Sakuma is his older brother, but he has a rather brusque attitude towards Rei. He hates getting involved with people. A member of the unit knights. 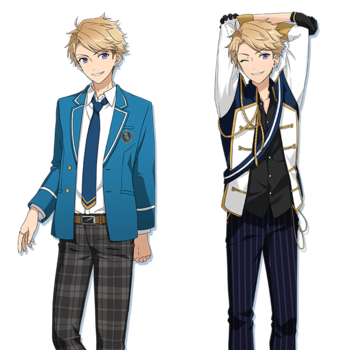 EnStars!: I'll have both the world and radiance in my hands.
EnStars!!: The Always-Dependable Sister Knight
"My oh my! How rare to see a girl at our academy!"

A self-proclaimed “big sister”. She treats the heroine affectionately and acts like a big sister to her. Her principle is "everything in moderation." Even though she’s versatile and try out all sorts of things, she’s not serious about any of them.

Being a narcissist full of self-confidence, she loves jobs that allow her to be seen by others. She worked as a model before she entered the school. The teacher Akiomi Kunugi is her former senior in the modeling world.. Member of the unit Knights. 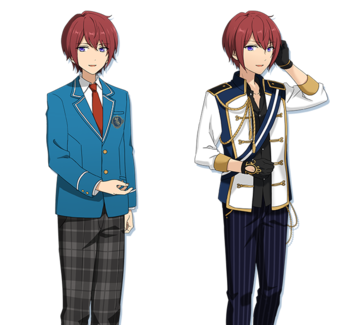 EnStars!: Onee-sama, repeat after me♪
EnStars!!: Holy Knight Who Swears Loyalty
"To this, I can only say 'Marvelous'!"

Serious and composed, Tsukasa speaks in a manner rather mature for his age. He is a rich young master who may sound polite on the surface, but what he says is actually rude when you stop and think about it (though he doesn't realize it). He honors his family rules and does his best to improve himself, but he also slightly deviates from what's considered normal.

While his gentlemanly manner attracts the ladies, he seems to be unaware of this and doesn't know much about the female mind. A member of the unit knights. He has interest in the culture of commoners. His English pronunciation is smooth, which unfortunately only makes it hard to catch.