In the first game, Ra✽bits, led by Nazuna Nito, is a newbie unit whose biggest charm is their fluffy cuteness! Consisting of three first years and one third year, they may seem wobbly at times, but they're doing their best with their idol activities!

In the second game, Ra✽bits a cutesy unit affiliated with Rhythm Link. Temporarily led by Tomoya Mashiro, their fanservice is bright and cheerful. Ra✽bits utilizes their inexperienced but fresh approach when taking on work. Their work in media tends to consist of doing commercials for campaign characters, doing street event reporting, performing as kid's show characters, and doing narration work. Their primary focus is work that allows them to leave a clear, positive impression.

Their theme color is light blue. 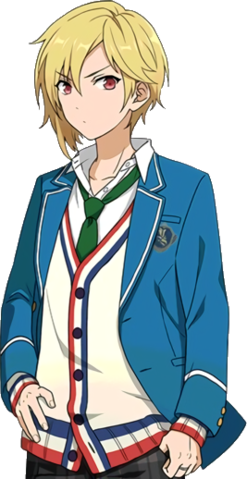 His personality is usually bright, cheerful, and friendly, but he hates it when people treat him like a kid and call him cute. He is highly self-conscious of himself in the role of the older figure, getting his underclassmen to call him "big bro" and showing concern for them.

His movements are very flexible, like a small animal's. As a part of the Broadcasting Committee, he manages the school broadcast program. He speaks with a lisp and greatly fumbles with his words when nervous. Leader of the unit Ra✽bits. 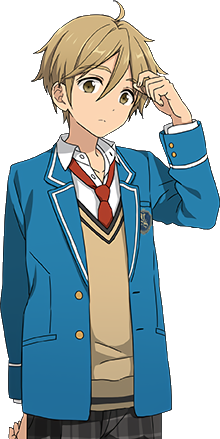 "It's more than enough that I'm the only one polluted by the captain!"
Voiced by: Shun'ya Hiruma (Japanese), Blake McNamara (English)
Portrayed by: Yuu Miyazaki (stage play)

An ordinary boy who grew up in an average family, Tomoya is a pushover. He hates it when others think he's weird because of the peculiar people around him, but he doesn't want to be seen as "average," either.

In the Theater Club, he loathes the eccentric Wataru Hibiki, but highly respects Hokuto Hidaka. Since they make him read all sorts of scripts, his speech tends to become mixed up as a result, and he has some trouble with formal speech. A member of the unit Ra✽bits.

Hajime is the dedicated type who does part-time jobs at school to support his unit, Ra✽bits, even taking on odd jobs like laundry and such. Taking care of flowers is a part of his daily routine, and he often takes the initiative to prepare the drinks in the tea club. He has trouble making eye contact while conversing with people he just met.

Due to his social anxiety, he carries a lavender aromatic pouch around as a protective charm. He has a mild case of paranoia. His singing voice is really beautiful. He is good friends with his classmates Tomoya Mashiro and Tetora Nagumo. He comes from a poor family. He's also prone to day-dreaming. 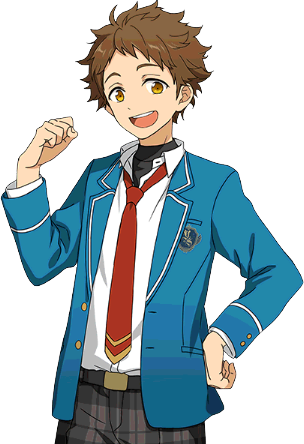 Cheerful, energetic, carefree, and oblivious, Mitsuru is always smiling, but he's not exactly the sharpest pencil in the box, and neither does he think things over carefully. He doesn't really pay attention when someone's talking to him, and gives no heed to sarcasm. He doesn't like difficult words. Due to his excellent reflexes, he's very popular among the sports club as a helper, even though he's only a first year.

He loves dashing (as in running) and often runs around the school ground. When tired, he'd lie on the grass, bask in the sun, and then fall asleep just like that. A member of the unit Ra✽bits.