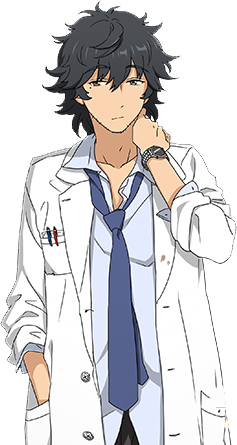 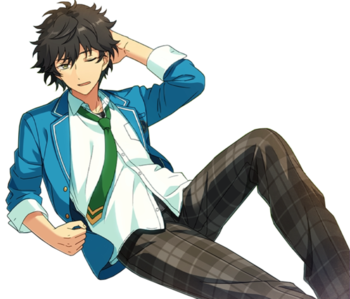 to see Jin as a student.
"I'm gonna cut out my usual nightcap. This is my promise to my adorable students."
Voiced by: Tomoyasu Hishiba (Japanese), Mike McFarland (English)

Jin is a sloppy man who couldn't care less about his own appearance. He dislikes exercising. His job is to monitor the students' health, but he completely fails at taking care of himself. He's a physical therapist and is in charge of general education.

He often shuts himself in the infirmary, which has become the base and center of his life, and reads books there. Due to his friendly manner of speaking, he's well-loved by the students. He used to be a celebrity in the past. He met the teacher Akiomi Kunugi during that time, and they've been acquaintances ever since. They share friendly chats every now and then. 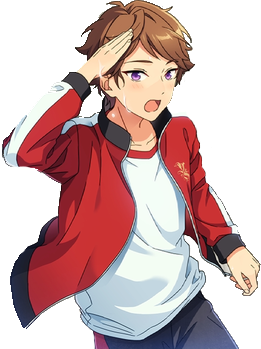 Fast-paced, serious, and high-strung, Akiomi is harsh on both himself and others. He's in charge of the idols' specialized curriculum and student guidance, and he also acts as the advisor of the Student Council. He's courteous and polite, but has a sarcastic manner of speaking. He can't help but give cautionary warnings to students who concern him, no matter how slight the reason may be.

He used to be a multi-talented idol who started his career in modeling, but has since resigned and become a teacher instead. He's known the school doctor Jin Sagami since his days in the entertainment world.

A Former Idol who happens to be Hokuto's father.