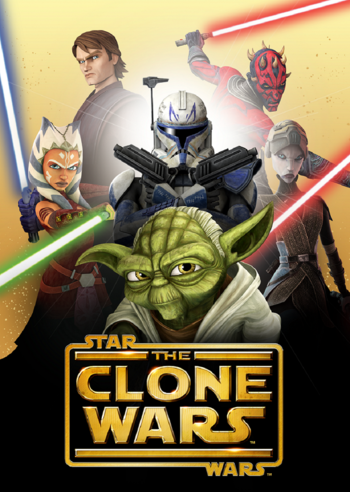 For every star, a story there is.note  Clockwise from center: Captain Rex, Darth Maul, Asajj Ventress, Yoda, Ahsoka Tano, and Anakin Skywalker.
"Unfortunately, war tends to distort our point of view. If we sacrifice our code, even for victory, we may lose that which is most important: our honor."
— Obi-Wan Kenobi
Advertisement:

Star Wars: The Clone Wars is a CGI animated series set in the Star Wars universe. It is created and executive produced by George Lucas and directed by Dave Filoninote Filoni eventually became an executive producer in Season 7 (Avatar: The Last Airbender).

Set after Attack of the Clones, the galaxy is at war as the Galactic Republic and the Confederacy of Independent Systemsnote also known as the Separatist Alliance or Separatists vie for control, and the Jedi Order serve as the generals of the Republic's Clone Army. The series principally focuses on Anakin Skywalker (Matt Lanter), Obi-Wan Kenobi (James Arnold Taylor), and Ahsoka Tano (Ashley Eckstein) as they deal with the various adventures and battles fought in the war alongside the clone troopers (Dee Bradley Baker), other Jedi, and politicians up until the events of Revenge of the Sith that conclude the war.

The Clone Wars began with a Pilot Movie distributed by Warner Bros. Pictures on August 10, 2008, and premiered on Cartoon Network on October 3, 2008. The series was in production of a sixth season, but was cancelled shortly after the season five finale on March 2, 2013 following Disney's acquisition of Lucasfilm. The episodes of the series that were in production were released as a Netflix exclusive on March 7, 2014 while some of its unproduced story arcs have been adapted into other canonical mediums.

In July 2018, The Clone Wars was Un-Canceled approximately four years after the sixth season. The seventh and final season premiered on Disney+ on February 21, 2020 and concluded on May 4, 2020.

The Clone Wars is the final work created and executive produced by George Lucas prior to selling the Star Wars franchise to Disney. The Clone Wars is also the only Star Wars work outside of the original six Star Wars films to be considered canon following the franchise-wide Continuity Reboot due to Lucas' heavy involvement with the series and its influence on several other works that would be released afterward.

Star Wars: The Clone Wars was followed in production order by Star Wars Rebels and Star Wars Resistance prior to its seventh season, the former of which serves as a distant sequel to this show with several characters returning. After Season 7, the series is chronologically followed by Star Wars: The Bad Batch, which focuses on the titular team of clone troopers left to fend for themselves in the age of the Empire.

See also the previous Clone Wars animated series, which this series largely supersedes as Canon but was made in between Attack of the Clones and Revenge of the Sith in real life.

Please move any character tropes to the proper character pages and tropes associated with particular episodes and story arcs to the recap page.

"This is a war. If we aren't willing to do what it takes to win, we risk losing everything we try to protect."
Feedback

After being invited to a banquet of Weequayan pirates, Anakin and Obi-Wan are given drugged drinks. But having seen this coming from a mile away, they discreetly use the Force to switch cups with their neighbours.

After being invited to a banquet of Weequayan pirates, Anakin and Obi-Wan are given drugged drinks. But having seen this coming from a mile away, they discreetly use the Force to switch cups with their neighbours.