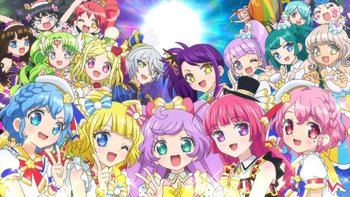 PriPara, short for Prism Paradise, is an arcade game from Takara Tomy and the fifth entry in the Pretty Series. An anime series by Tatsunoko Production (who also did one for Pretty Rhythm) aired in the summer of 2014 and ended with 3 seasons in early 2017. 4 films have also been made with the last one premiering in 2017.

2020 also saw the announcement of a new installment in the franchise: Idol Land PriPara, a mobile game which would also have an internet anime series. Idol Land was slated for a 2021 release, but got delayed to Spring 2022 in order to make improvements to the game. To make up for this, the first episode of the anime released in August 18th, 2021 as part of an early screening, with the zeroth episode releasing on September 1st. It was later delayed to Fall 2022 in order to make MORE improvements to the game.