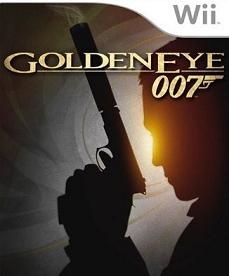 But now my time has come.
And time, time is not on your side.
Advertisement:

The One With… Daniel Craig in a reimagining of the classic N64 game.

GoldenEye is a Video Game Remake of Rare’s iconic 1997 FPS game of the same name, itself an adaptation of the 1995 James Bond film of the same name. It was developed by Eurocom, published by Activision, and first released on the Wii in November 2010.

The story and setting have all been brought into the 21st century and the latest Bond, Daniel Craig, takes over the original Pierce Brosnan role (although the writer of the GoldenEye film was brought on). Considering Craig's 007 is a darker, grittier agent, the overall tone of the game reflects this difference. As a result things like Alec Trevelyan's motivations have changed as the character's backstory involving a Lienz Cossack father would make him at least 71 years old and Valentin Zukovsky is no longer connected to the KGB.

Naturally, considering the original was groundbreaking 13 years prior, the gameplay has been significantly altered to reflect modern advancements in the FPS genre.

Heavily inspired by the much loved multiplayer of its predecessor, the game also features not only the classic four player split-screen gameplay of old but adds 8-player online to the experience. The multiplayer also includes 8 classic Bond characters (Jaws, Baron Samedi, Oddjob, Francisco Scaramanga, Ernst Stavro Blofeld, Red Grant, Rosa Klebb, and Dr. No), several classic and brand new game modes, and even enhanced versions of classic multiplayer maps from the original game. A special edition of the game is also available with a "golden" Wii Classic Controller.

A Nintendo DS version made by n-Space was released alongside the Wii game. While the plot is the same, the levels are radically different and the gameplay has some changes to accommodate the DS.

There is an Updated Re-release, Goldeneye 007: Reloaded, on the PlayStation 3 and Xbox 360. They were originally meant to be released alongside the Wii/DS version, but the latter versions were released first as a nod to the N64 version.

A synopsis of the updated story can be found here. For the other two games starring Craig's Bond, see Blood Stone and 007 Legends.