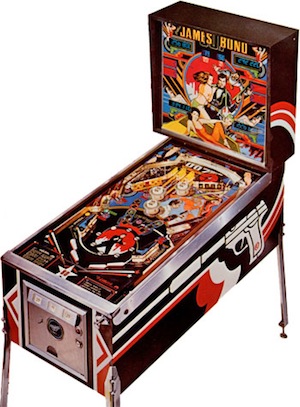 James Bond 007 is a Pinball game designed by Allen Edwall with artwork by Doug Watson. It was released by Gottlieb in 1980, and is based on the James Bond film franchise, particularly The Spy Who Loved Me.

Unlike most pinball games, James Bond 007 is not centered around maximizing your score with a limited number of pinballs available. Instead, the game is time-based; the player starts off with 50 "Time Units" (seconds), and can keep playing so long as they have time remaining. Naturally, the clock ticks down during gameplay; the player can temporarily stop the clock or get more time by making key shots, but the game ends when the ball drains after time has expired.

Unfortunately, although it was an interesting idea, the game failed to resonate with players — novices couldn't build up enough Time Units to get a reasonable game experience, while pros found the open playfield boring and easily exploited for indefinite play. The backlash was so bad that most operators tried to return the tables to Gottlieb. In response, the company released updated ROMs to turn it into a conventional pinball game without the timer, but it still failed to find an audience.