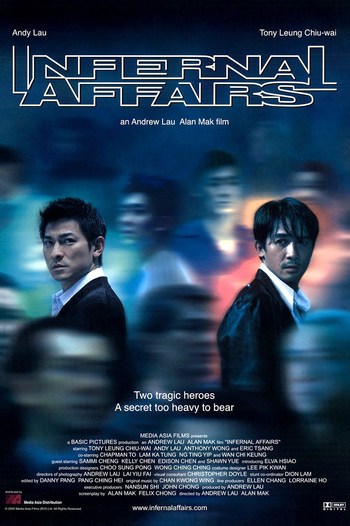 The three Infernal Affairs films are incredibly twisty cops vs. Triads films set in Hong Kong between 1991 and 2003. The first film, set in 2002, is based around the stories of two mirrored infiltrators. Chan Wing Yan (Tony Leung Chiu-wai) is an undercover cop in the gang of the chubby, Affably Evil gangster Hon Sam (Eric Tsang). Yan's handler is Chessmaster senior cop Wong Chi-shing (Anthony Wong), who doesn't realise that his most trusted underling, Lau Kin Ming (Andy Lau), is actually a mole planted in the police force by Sam years before. As Wong's attempts to bring Sam down reach their endgame, Yan and Ming both find their covers in danger of being blown and are both ordered by their pretended bosses to catch the "moles" who are actually themselves.

The second film is a Prequel that tells the story of how Sam rose to his position in the first film, and the unexpected roles that Yan, Ming, and Wong played in that.

The third film is a sequel that follows the stories of the surviving characters from the first film, and also tells a flashback story set just before it. It introduces two new significant characters to replace the dead people: Yeung Kam-wing (Leon Lai), a smooth and sinister, possibly corrupt, cop from the Security branch; and "Shadow" Shen Cheng (Chen Daoming), a mysterious gangster from the Chinese mainland.

Elements of all three films were streamlined into the remake as The Departed, which transferred the action to Boston and made the Triad equivalents Irish-American gangsters (with a bit of Irish Mob mythology about Whitey Bulger

tossed in), and won the 2006 Best Picture Academy Award. In Japan, an episode aired in TBS in 2012 as a remake under the title Double Face - Sennyuu Sosa Hen. It was adapted in South Korea as City of Damnation and in India as Homam in the Telugu language.

There's a TV series sequel with the same name, which takes place years after the end of the third movie.