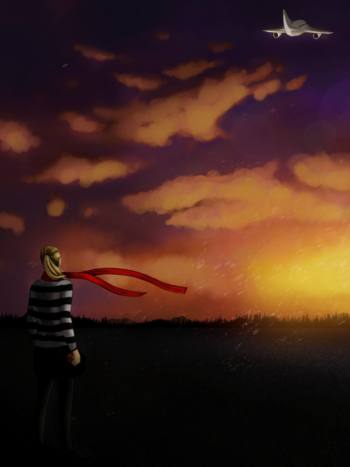 Distance over Time — Cover art by Skitterine
"I need you to do more than try. I can't keep doing this. I mean it. I have so much to say and no more time to say it. I've kept so much back. I can't do it anymore."
— Serena
Advertisement:

Serena has a crush on Ash. She's had feelings for him for years, and everyone knows it - except him, of course. Always too shy to tell him, Serena thinks her journey with Ash is going to come to an end without ever sharing her feelings with him. Her time to tell him is soon to run out, but that changes when she and her friends receive an all-inclusive vacation in a luxurious coastal city as a reward for helping to save Kalos from Team Flare. Serena gets two extra weeks to confess her feelings to Ash, and so begins a series of events that will change everything between them.

The Camera Eye is a series of Pokémon anime fanfics by johnny3gud. Told entirely from Serena's perspective, the stories focus on the inner workings of her mind and her interactions with others as she deals with the many trials and tribulations of falling in love with a notoriously dense partner. Initially set late in the XY anime, the series departs from canon and follows Serena on her surprise vacation and beyond, providing something of an alternate ending to the XY anime and a new continuity from Sun & Moon onward.

While fundamentally a romance story, the tone of the series is more serious than its initial premise suggests, and what begins as a vacation fic with a Will They or Won't They? subplot quickly becomes something very different. Dialogue-driven and focused heavily on character development, the series serves as a Coming-of-Age Story for Serena while deconstructing both her as a character and her longstanding infatuation with Ash.

The Camera Eye Series contains examples of the following tropes: