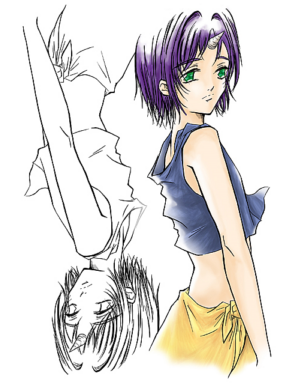 "For my birthday, when I was ten, Papa gave me hair ribbons and chocolate and a new set of spanners and the chance to pilot an airship without Erin at the co-pilot's wheel. For Vivi's birthday, when he was twelve, he got a houseful of dead children and left us a very gentle little note and went off and Stopped.

Thirteen years have passed since the events of Final Fantasy IX, and Eiko Carol Fabool has grown into an intelligent, self-possessed young woman and the heir to the regency of Lindblum. She is beloved by her parents, keeps in touch with her old adventuring buddies, and is well on her way to becoming a talented airship engineer.

There are only two disappointments in her perfect world: her fading connection to her eidolons, and the lingering pain of losing her childhood friend, Vivi Ornitier, when she was ten. Otherwise, everything about her life seems almost too good to last.

And then Lindblum is attacked without warning by a violent unknown aggressor, and in trying to stop him, Eiko finds herself whisked away to the ruins of the Desert Palace. Trapped at the mercy of a madman, and armed with only her own wits and some half-forgotten white magic, Eiko struggles to find a way to escape and return home...while at the same time piecing together clues about her mysterious captor. What exactly is Black Tango? What is his connection to Kuja, to the black mages, and to the dead world of Terra? And what part did he play in Vivi's death?

Go Not Gently is quite possibly the best-known FFIX fanfiction on the internet, and certainly among the best. It tackles the darker side of many of the same questions about life, death, and survival that were raised by the original game, and provides some very interesting explorations of the inner workings of magic and summoning on Gaia. In the process, it paints vivid, well-painted portraits of all the familiar FFIX heroes thirteen years down the line, and adds a small but judicious handful of original characters to the mix.

If all this sounds good to you, go and read the story

before scrolling down. There are some extremely powerful plot twists that are really best experienced fresh, and only the most major are spoiler tagged below. You have been warned.