The amount of characters seen during Songs of War is so huge that they've had to split into different pages:

Long before The Great War, Ardonia used to be ruled directly by the Enderknights. Eventually however, the people rebelled, and King Rendor of the Enderknights split the world into six kingdoms (as well as the Ardoni territories). Just before The Great War, they were overwhelmed by the invading Nether army, and called upon the Ardoni to wield the Prime Songs, directly leading to the events in the present day. All of the characters who's affiliation are definitely said to be of one of the six kingdoms, or whose species originate from said kingdoms, are listed under their respective kingdoms.

One of the largest kingdoms in Ardonia, Conchord is the nearest kingdom to the Ardoni territories, primarily inhabited by humans, and located mainly in a forested biome. Its capital is Oakendale, and its national colours are Green, Brown and White. One of its other cities, Etherea, houses one of the few remaining Dragon Stones in all of Ardonia.
Abbigail 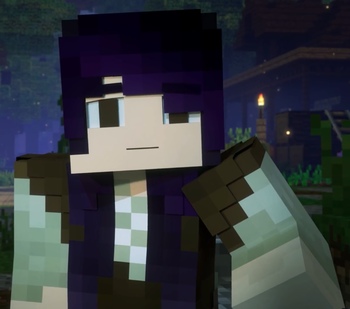 They were coming for the stone
I'm not a farmer! I'm going after that stone. If we try to alert Etherea it will be too late, but Sam and I can track them while their trail is fresh.

Abbigail is one of the three main protagonists (alongside Senn and Lucan) of Songs of War. A farmer from Underwood, like her parents, Abbigail was raised by Mr Finch after her parents were killed. She is however, resentful of her life as a farmer, and wishes to go out and become something different, something she finds after discovering the Dragon Stone from Etherea. 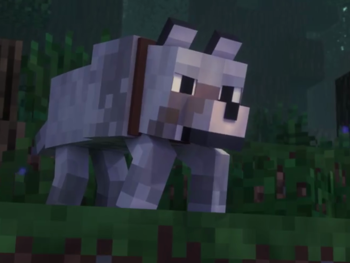 Sam, barking at the Dragon Stone.

Abbigail's faithful dog, who helps her out with gathering food and harvesting crops at their farm in Underwood. As with any other dog, he barks at just about anyone or anything he thinks is strange or dangerous. 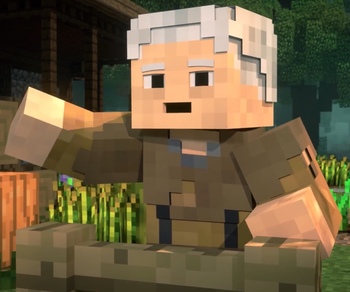 We're farmers, after all.
Hew, I was about to send for a doctor. You've been out all day.

Abbigail's elderly neighbour, Mr Finch has been looking out for her ever since she was orphaned some years ago. He is a strict grandfather-like figure to her and keeps trying to get her to stay on her farm in Underwood so as to keep her safe from the (admittedly dangerous) world outside of their farms. 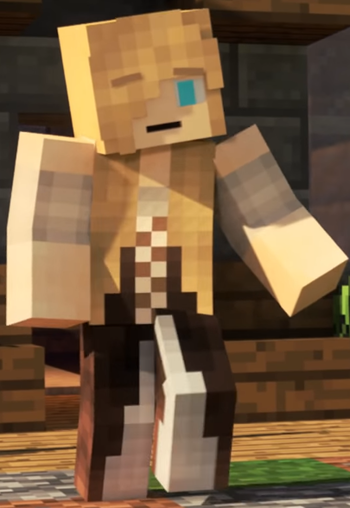 Abbigail? What's this all about?
That's not just a dragon stone Abbigail, it's an Ender Dragon egg. No wonder they were so determined.

A farmer living at the edge of Underwood, Darlene is a friend of Abbigail, who occasionally comes to visit. She owns two horses that Jalkar and Grim tried to use in order to escape in Episode 5, and later explains to Abbigail the importance of the Dragon Stone.

Possibly the smallest of the kingdoms in Ardonia, encompassing much of the south of the supercontinent, Cydonia is primarily inhabited by humans, and primarily located in a desert biome. Its capital city is Meridian, and its national colours are White, Orange, and Dark Grey. It has recently gone to war with its neighbouring kingdom K'arthen, and the two share the honour of having the largest armies in Ardonia.
Aren

A contact of Galleous Sendaris who lives in Meridian, he will help Igneous to settle the conflict between Cydonia and K'arthen in Season 2.

A Kingdom in the West of Ardonia, Felden is the birth place of the Felina species, where they coexist alongside humans. It's primarily located in a jungle biome, its capital city is Felora, and its national colours are a mix of Greens and Black. They are currently under threat from an onslaught of attacks by the undead and Necromancers. 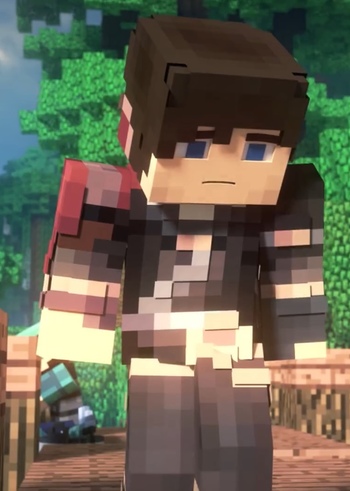 So mining duty huh? You mean... underground, where the undead are?
I don't know anything about attack strategies, or Necromancer plots. I just got forced into this.

Lucan is one of the three main protagonists (alongside Abbigail and Senn) of Songs of War. A low-level thief from Riverstead, and someone whose minor crimes have forced him in and out of prison for most his adult life, Lucan's good behaviour got him an accelerated release... In the form of mining duty, a very dangerous job. It's there however, that he gets wrapped up in a Necromancer attack, and is then tasked with investigating and reporting them, instead of mining duty. It's on this investigation that he comes across an independent Felina, Niika, who reluctantly teams up with him. 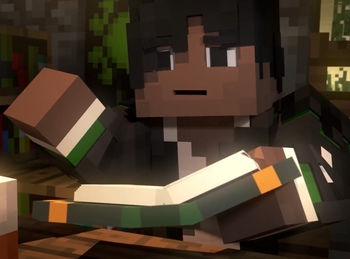 You're being assigned to mining duty near the Basalt Coast.
Since you continue to show good behaviour, and your crimes were, once again minor, we're going to accelerate your release.

Marcus is the warden at the Riverstead Prison, overseeing Lucan's imprisonment and subsequent assignment to the Basalt Mines.

You know how things are, mines running dry, resources getting scarce. We're being forced to mine deeper into the dangers that lurk below.
Eddy 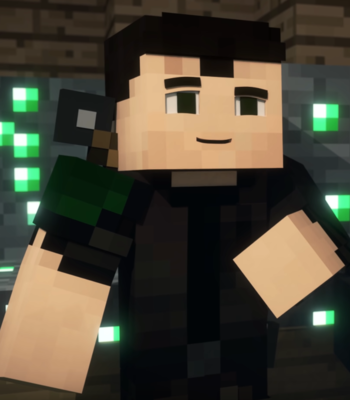 That's me. Eddy at your serviccccccccce.
I've been a guard here at the Basalt Mines all my life and boy I'll tell you. *takes a swig* I have guarded like you've never seen...'

Coming from a family of guards at the Basalt Mines, Eddy is tasked with protecting Lucan with his mining duty in Episode 3. While he is a competent guard (despite his heavy drinking), he was no match for the horde of undead when they showed up with weapons and armour. 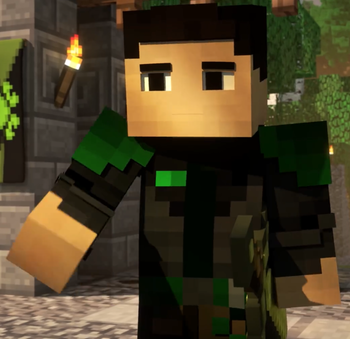 Captain Kiyoshi, Sir!
You must be Lucan. A messenger bird flew in yesterday and alerted us of your arrival.

Alec is a sergeant based in Fort Zuka, and a direct subordinate of Captain Kiyoshi. He was only posted to Fort Zuka fairly recently, having only been in the Felden military for three years as of the present. 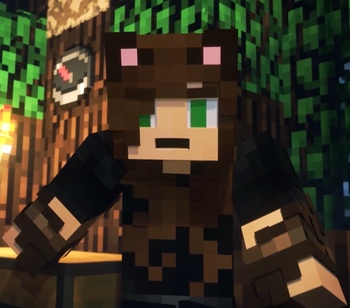 You've gotta be the worst Necromancer I've ever seen.
What? You heard him. He said he wasn't going to tell us anything. Or we're you enjoying his little speech?

A lone Felina who's been going after Necromancers for several years, being the only one who properly knew of their existence until Felden officially recognised the threat that they truly were. She mistakes Lucan for a Necromancer on his first night investigating them, attacking him in the process. With some reluctance, she teams up with him to find their hideout. 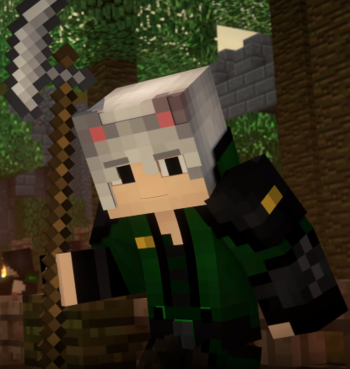 Try not to mess things up.
Let's try to be professional about this. I don't want a criminal in my ranks any more than you want to be under my command, but orders are orders.

Another very large kingdom (its size rivalling that of Conchord), inhabited primarily by humans, and located in a plains biome. Its capital is Hyperia and its national colours are White, Blue, and Dark Grey. It has one of the largest Navies in the whole of Ardonia.

The home of the Magnorite species, K'arthen is a volcanic biome where very few non-Magnorites dare to live, located just above the kingdom of Cydonia. It has few settlements, one of which being its capital, Tartarus, and its national colours are Black, Dark Grey, and Red. Recently, it has gone to war with its southern neighbour Cydonia, after which, it left the Union of the Kingdoms based in Crown Peak. K'arthen has one of the largest armies in Ardonia, rivalling that of Cydonia.
Igneous 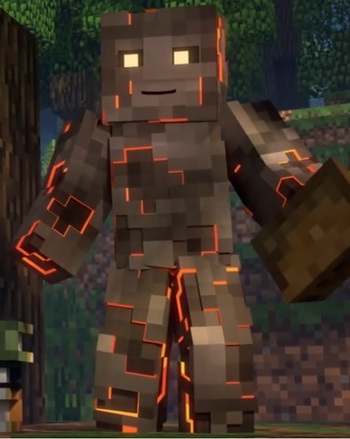 Oh, hello there. I hope you don't mind if I read here. It's a nice bit of shade.
I'm a traveller Senn, and if I can end this conflict, I may end the oppression of Magnorites everywhere.

An independent Magnorite born outside of K'arthen, Igneous is unique among Magnorites in that he is easy to get along with, despite the prejudice that he faces in places like Hogtown, which is where he meets and befriends a then-lonely Senn.

As the name suggests, Northwind is located in the frozen north of Ardonia, being very much the North's equivalent to Cydonia (in terms of size and location). It's primarily inhabited by humans, is located in tundra and taiga biomes, has a mix of blues and whites as its national colour, and has Hailstone as its capital. It's within Northwind that the Walls of Time can be found and explored.