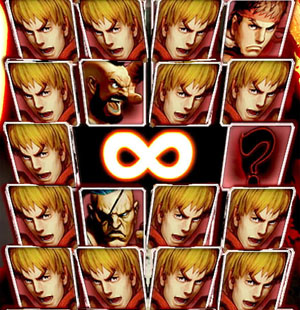 Games with evolving Meta Game tend to avert this, because as new strategies are learned, characters fall in and out of popularity. Players that try to enforce this limited set of options onto others, depending on which side of the Casual/Competitive Conflict they stand on, become either Scrubs or "Stop Having Fun" Guys.

Supertrope to Abridged Arena Array, which is limited to arena locales. Compare Just Here for Godzilla, where players get attracted to this limited set of options to the point of ignoring everything else the games have to offer. Compare Default Setting Syndrome, when players keep picking the default options for the game, whether because the alternate options are less balanced or fun, aren't aware they can change the options, or are just lazy to change them. Contrast Alt Itis, which is the exact opposite condition, most often induced by a stringently balanced game. Contrast with Self-Imposed Challenge, where players attempt to defeat the self-imposed boundaries by trying new challenges or options.